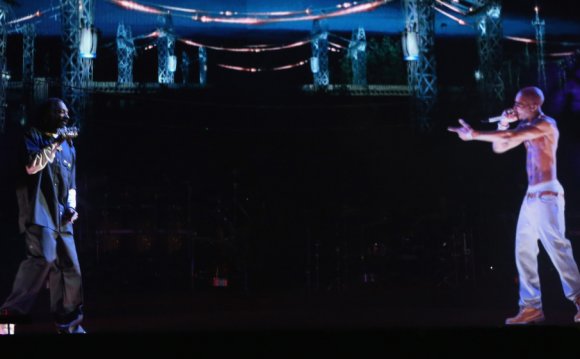 That Tupac hologram that wowed Coachella crowds Sunday evening and will maybe go on tour wasn't actually a hologram. It was a technology that dates all the way back to 1862 called Pepper's Ghost, said The Wall Street Journal's Ethan Smith on The News Hub. "It’s not a hologram. It’s very, very simple technology, from the Victorians actually, " Jim Steinmeyer, illusion designer and author of the book Hiding the Elephant, confirmed to The Atlantic Wire. Considering the (creepy!) life-likeness of the hologram, which one Coachella attendee told us she looked more like an impersonator than an optical illusion, it's pretty impressive that it boils down to a 19th-century theatrical effect.

All it takes to make your very own Tupac "hologram" is a Pac replica and a plate of glass and light, Steinmeyer explained. It's the same stuff used - minus 2Pac - for the very first Pepper's Ghost demonstration back in 1862 at the Polytechnic Institute in London. There John Henry Pepper used an angled plate of glass to reflect light off of a hidden actor below the stage, making him appear ghost-like on stage. "That glass would reflect that actor and lift that actor up so it appeared the actor was on the stage." Steinmeyer told us. "It was a relfection in the glass and you had to light the actor really brightly." As this YouTube demonstration below shows, the very same principles are used for modern day Pepper's Ghosts. Like Steinmeyer said, super simple.

Without the real live Tupac to dance around below the stage, for the Tupac performance, Steinmeyer suspects the creators used old footage of the deceased hip-hop artist. "I would say they used old footage and computer enhanced it so the background was black, " he said. Black, so the background blended with the darkened Coachella stage. "It works very well with media." He also suspects the creators used more innovative materials than glass, possibly stretched plastic, to make the setting more realistic.

Though, Ed Ulbrich, the chief creative officer of Digital Domain, the company that created the image leads us to believe otherwise. "This is not found footage. This is not archival footage. This is an illusion, " he told The Journal's Smith. The company actually created a brand new computer generated-Pac performance for Sunday's show using splices of old appearances and tours, explains Smith. "To create a completely synthetic human being is the most complicated thing that can be done, " continues Ulbrich. Hmm, maybe it's not so simple after all.

This not only explains the lifelikeness but also why it took several months to plan and almost four months to create and why it cost somewhere in the $100, 000 to $400, 000 range, according to an MTV interview with AV Concepts, another company that worked on the setup. "I can't say how much that event cost, but I can say it's affordable in the sense that if we had to bring entertainers around world and create concerts across the country, we could put [artists] in every venue in the country, " AV Concept's Nick Smith told MTV's Gil Kaufman.

How coachella made the 2pac hologram appear

The Technology Behind The Tupac Hologram