Real holograms, that float as 3D images in the air, are finally here. The company that's made the breakthrough, Ostendo, has created a hologram with its 5, 000ppi projectors that it plans to fit into smartphones in the second half of 2015.

The hologram is created using six projectors that layer light to create an image floating in the air, like a real solid object.

The discovery has come from fusing an image processor with a wafer of micro LEDs to create the Quantum Photonic Imager. The end result is a projector that's about the size of a Tic Tac powered by the chip which controls the colour, brightness and angle of each beam of light. 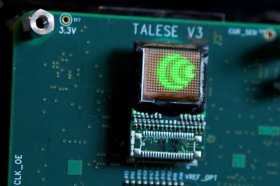 The holographic projector prototype, as demoed to The Wall Street Journal, displayed a floating 3D dice which looked solid from all viewing angles. While the iPhone's Retina Display churns out 300ppi, this "object" is displayed with almost real 5, 000ppi projectors.

Ostendo says it is working with handset manufacturers now for a 2D projector in a mobile by the summer of 2015. But the full 3D projector should arrive later in 2015.

Amazon is rumoured to release a phone soon that features four cameras to track eyes and create a virtual hologram within the screen. Either the rumours are wrong or Amazon is going to be left behind right from the release of its first phone.

Ostendo is aiming to make the pixels even smaller to achieve higher resolutions. It will also be scaling up the size so 3D holographic projections can even appear from our TVs. The biggest jump in consumer technology since the iPhone could be here soon.

Turn Your TV Into a 3D Hologram Projector