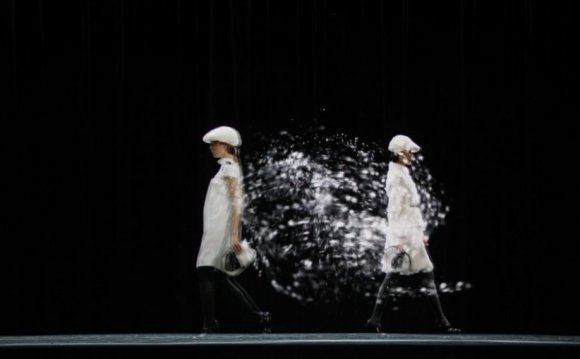 Performed for 850 people at the Kampnagel, Hamburg, Stefan Eckert’s 2011 show was the largest fashion show holographic installation ever created at the time.

The show’s innovative installation combined filmed real-life models with sound and light special effects, completely wowing the audience and showcasing Eckert’s amazing haute couture collection. A huge 18m foil was used to create the show’s holograms. Pre-filmed footage of the models and pre-arranged effects were projected onto the foil, creating holograms in place of real-life runway models and an uber-sized optical illusion that broke all the rules of time and space, on stage.

As a designer, Eckert designs high fashion pieces that are beautifully created and custom fitted – the very essence of haute couture. The challenge for the entire team, brought together to create the show, was how to communicate this philosophy behind Eckert’s work and new collection.

The decision was taken to present the clothes exclusively on virtual models in the world’s first 3D hologram fashion show. Creating the world’s first-ever holographic fashion show was not only completely groundbreaking at the time, but befitting of the German’s fashion label: one-off, exclusive and trendsetting.

Although fashion’s darling, Alexander McQueen, was the first to use a hologram of Kate Moss back in 2006, and many designers have since incorporated them into their presentations, Eckert’s 2011 show was completely holographic. It is difficult to imagine that it will ever be emulated in the way it kept the audience guessing throughout, asking ‘could this really be happening?’

Our technology in the world’s first-ever holographic fashion show

Motion-graphics designer, Tim Jockel, worked with director, Florian Sigl, and German haute couture fashion label Stefan Eckert to create the show. Jockel filmed the models with a high-speed camera before compiling footage in post-production and creating the holographic content with the Musion team.

Our team also teamed up with director Sigl at the outset of the project to create the visual concept and how to express the collection as best as possible.

For the show itself, our Eyeliner™ system was used to create the holograms. The show used a huge 18m x 6m foil, an integral part of the system, onto which content is projected to create the illusion of 3D holograms on stage.

Watch the above film to see the world’s first complete 3D holographic fashion show and reactions following its premiere. It is undoubtedly a perfect expression of Eckert’s work and philosophy.

The final word is best left to the designer himself. On his website, Eckert says his work is perfectly expressed in the following lines from Jack Kerouac’s On the Road:

“Because the only people for me are the mad who are crazy for life… who never yawn or say everyday things, but burn, burn, burn like fabulous yellow exploding sparklers and wheels like fire under the stars, and in the middle you see the blue light pop core and all shout ‘Ahhhhh’”.

That’s the show right there, in a nutshell.