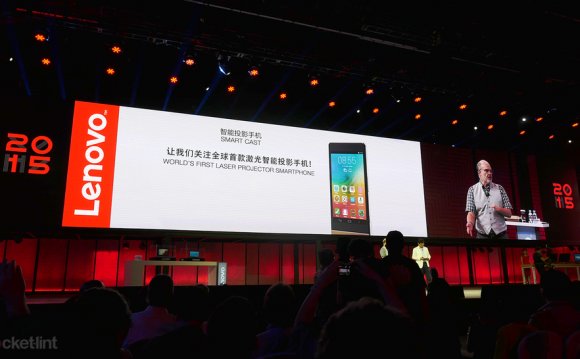 Projection keyboards have always been accessories. Not so with the Smart Cast, which incorporates a built-in Pico projector along with a gesture-based control system.

Transform any surface into a smart display thanks to a built-in kick-stand and variable bracket projector. But it doesn't stop there, as the gesture-based controls mean you can type or - as we were shown on stage at Lenovo Tech World - play a virtual keyboard in real-time. There appears to be little to little to no latency too, which can be a problem in some accessory systems such as this.

When the rumour mill suggested the iPhone 6 would come with a projection keyboard (which, incidentally, never happened) the internet lit up. But Lenovo has actually gone and done it; Smart Cast is a real product.

However, there are scarce details at present. Beyond the bonkers choice of name and a description of "cat-like features" presented in one slide that's as much as we've got to go on for now. More details to follow as and when (and if) we have them.