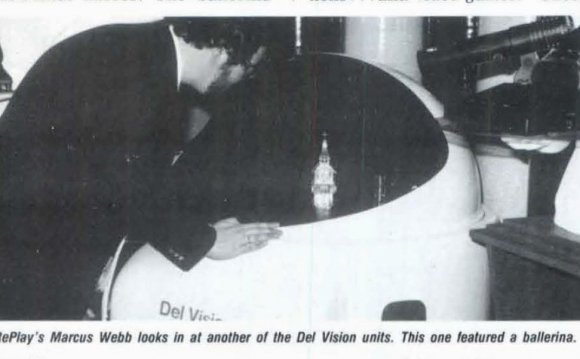 At the time, Dyer was working for a company called Allen Design in Carlsbad, California. After reading the article, he immediately contacted With Design In Mind and within a week, had inked a deal with the company (Capcom and Leland also tried to license the technology for use in video games, but Dyer beat them to the punch). Allen Design and With Design In Mind formed a partnership called Hologram Ventures and began designing a video game using the Micro-Theater technology. In truth, the Micro-Theater (and Time Traveller) did not use true hologram technology. Instead, it used a parabolic mirror shaped like a quarter sphere to project an image from a video monitor into space.

Unlike a true laser-based hologram (which allowed viewers to see an image from different perspectives as they walked around it), the mirror technique produced the same perspective from every viewing angle. One issue that Dyer’s team had to solve was the mirror, which, according to Dyer, had cost $7, 600 per unit when used in Japan (a prohibitive cost for an arcade video game). To solve the problem, Dyer subcontracted the creation of the mirror to an aviation firm that made canopies for fighter jet cockpits who was able to produce the mirror at a much lower cost. Nevertheless, development of the game was still expensive. Dyer’s team worked 24-hour shifts for the last 10 months to get the game ready for the ACME show (Dyer claimed it was one of the biggest R&D commitments in the history of the industry). Meanwhile, in late 1990, Sega had signed on as a partner to manufacture and promote the game. While Time Traveler used a laserdisc to store the game’s footage, unlike Dragon’s Lair and Space Ace, the game used live action rather than animation. 1, 000 actors auditioned or the game’s 36 speaking parts. Actor and professional Hollywood stunt coordinator Steve Wilbur landed the role of the game’s hero Marshal Gram. Las Vegas aerobics instructor LeAnn McVicker played Princess Kyia-La and Robert Mannigan (a struggling actor who was producing a cable access show in San Diego) was cast as the game’s villain Vulcor. Filming in San Diego, a crew of about five people headed by producer director Mark E. Watson, created about 30 minutes of footage for use in the game, complete with full digital soundtrack.