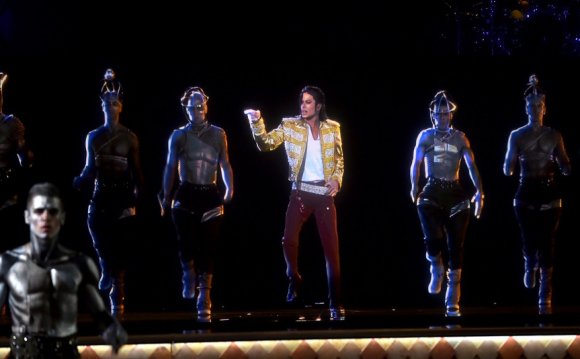 A holographic image of Michael Jackson performs onstage during the 2014 Billboard Music Awards at the MGM Grand Garden Arena on May 18, 2014 in Las Vegas, Nevada.

The Michael Jackson performance on the 2014 Billboard Music Awards was the result of nearly half a year of planning, choreography and filming, not to mention the development of new technology. Producers of the Billboard Music Awards did not see even a portion of the film until eight days before the broadcast.

Jackson, in hologram form, performed "Slave to the Rhythm" midway through Sunday night's show with a five-piece band and 16 dancers live onstage. Jackson appeared in gold jacket, white T-shirt and brick red trousers on a set modeled on the art work for the album "Dangerous, " an appropriate choice as the track was recorded in 1991 with L.A. Reid and Babyface during the sessions for that album. Released this week on "XSCAPE, " which is neck-and-neck with the new Black Keys album for No. 1 on the Billboard 200 next week, the track was produced by Timbaland.

BBMA producers Dick Clark Productions built a special stage at the rear of the MGM Grand Arena that was used only for the Jackson performance. Dancers moved through aisles as Jackson was seen rising from a throne, walking down steps before going into several trademark routines, a moonwalk being one of the them. Lasers, streams of flames and dancers in ancient costumes were part of the film.

Klein shot it to give the presentation the feel of a live performance. "You were watching the magic of Michael Jackson just like you would have when he was performing, " says Klein.

The selection of "Slave to the Rhythm" for the hologram performance was made late last year; Jackson associates the Talauega brothers and Jamie King were brought in to choreograph and direct the video, which was produced by Pulse Evolution and Tricycle Logic.

"At the time we made the decision, " says Jackson's lawyer and adviser John Branca, "'Slave to the Rhythm' felt like a song was something people could dance to, a potential club song. We talked to Jamie King, who directed the Michael Jackson Cirque du Soleil shows and we all felt the song was very likeable."

The Talauega brothers, Rich and Tone, were brought on right after the new year and they started to draw up dance moves for Jackson and the other dancers in the film. Their involvement with Jackson dates back to the 1995 MTV Video Music Awards; they also choreographed the HIStory tour in 1997 and if one had to guess, the image of Michael used in the performance appears to be from that era based on his hair and clothing.

"We knew we didn't need to go so far left field with his dance moves - we just kept it within his world, " Rich Talauega says. "Its just the way you reconfigure his steps so it looks different. You're still speaking the same language, it's just a different dialect."

Tone Talauega, who was still in high school when he started working with Jackson, says they studied the singer's moves and had small things adjusted - the angle of a hand, the tilt of his head. The performance is "classic Michael, but we put our spice on it, " he says.

Demand for the Jackson hologram was considerable, but in the end Branca and the estate felt it needed to be shown with a live audience.

"It's so important to experience Michael Jackson in a live setting, " Branca says. "This is something where we wanted a live performance in front of a live audience and nothing speaks to that more than an awards show."