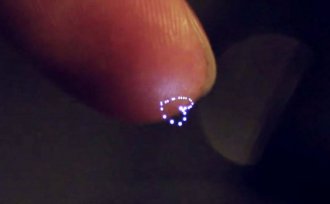 A scientist flicks on a switch. Like magic, a small, delicate image of a fairy appears, suspended in the air. The scientist then reaches out to touch the floating figure: it feels rough, like sandpaper. This might sound like it's been taken straight out of science fiction, but think again, because this is the reality for Yoichi Ochiai and his fellow researchers at Digital Nature Group.

The team has been using a host of lasers, lenses and mirrors to create holograms suspended in the air that humans can touch. This technology means that holograms can now move away from two-dimensional surfaces and enter the limitless three-dimensional world. And since the holograms are touchable, they become interactive: when you touch a holo-heart it breaks in two, or when you touch a checkbox a tick appears in it.

These holograms are created using a laser that fires ultra-short bursts of light, the length of femtoseconds, or a quadrillionth of a second (it's very short). The laser is concentrated on a region of air molecules and gives them enough energy that they ionize (release an electron) and emit light. This concentrated mixture of positive and negative particles is called plasma. When human skin comes into contact with the plasma, it senses the hologram from the vibrations of the energetic air molecules. Ochiai, the principal investigator, says that the hologram feels a bit like sandpaper, but the other participants likened it more to a static shock.

The hologram can be programed to change when you touch it. Touches are registered using a camera positioned underneath the hologram, and the information is subsequently relayed back to a computer which changes the holographic image.

If you're wondering why the researchers used such unfathomably short pulses of light, this was necessary as a safety precaution. Holograms of this nature have been made in the past, but by using longer-length pulses on the scale of nanoseconds. The trouble with these pulses is that the resolution isn't as high, and these lasers burn human skin.

Because the speed of the laser pulses has to be so fast, the images created by these ingenious lasers are currently only around 1 cm3 in size. However, because they are created with the help of reflections, the team thinks that there is potential for scalability in the future.

You can see some of the incredible applications of this technology here.

Fairy Lights in Femtoseconds: Tangible Holographic Plasma (SIGGRAPH).
The team is calling the displays that these lasers create "fairy lights, " and it's easy to see why. Not only are the lights so small that they look like they were made by pixies, they are also harmless to humans.

Lasers and Holograms you can Touch

Holograms That You Can Actually Touch