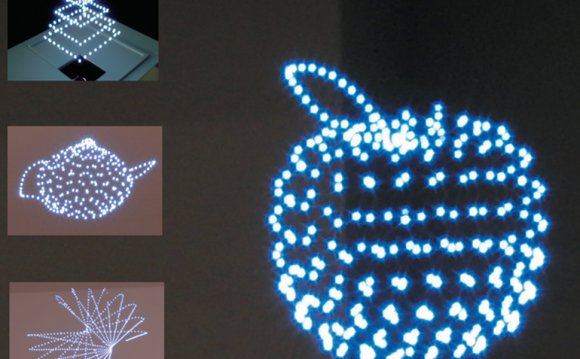 Science fiction has promised us three-dimensional midair displays since at least the first Star Wars movie. We’ve seen a few holographic technologies that have come close; they rely on optical tricks of one sort or another to make it seem like you’re seeing an image hovering in front of you.

There’s nothing wrong with such optical tricks (if you can get them to work), but the fantasy is to have true midair pixels that present no concerns about things like viewing angles. This technology does exist, and has for a while, in the form of laser-induced plasma displays that ionize air molecules to create glowing points of light. If lasers and plasma sound like a dangerous way to make a display, that's because it is. But Japanese researchers have upped the speed of their lasers to create a laser plasma display that’s touchably safe.

Here’s what a conventional (if that’s a word that we can apply to this technology) laser-induced plasma display looks like, from a Japanese company called Aerial Burton:

Those brightly glowing voxels (pixels in three dimensional space) are air molecules that have been ionized at the focal point of an infrared laser and are releasing extra energy in the form of bluish-white photons. The plasma doesn’t last long, so the way to make a display is to use a laser that scans through a volume of air very quickly, firing tens or hundreds of of thousands of times per second to create a sequence of short-lived (nanosecond-scale) voxels that create the effect of a moving image.

However, a nanosecond-scale plasma burst still contains a significant amount of energy; you don’t want to go walking through one of these displays, because it will burn you. Researchers from the University of Tsukuba, Utsunomiya University, Nagoya Institute of Technology, and the University of Tokyo have developed a “Fairy Lights” display system that uses femtosecond lasers instead. The result is a plasma display that’s safe to touch.

Each one of those dots (voxels) is being generated by a laser that’s pulsing in just a few tens of femtoseconds. A femotosecond is one millionth of one billionth of one second. The researchers found that a pulse duration that minuscule doesn't result in any appreciable skin damage unless the laser is firing at that same spot at one shot per millisecond for a duration of 2, 000 milliseconds. The Fairy Lights display keeps the exposure time (shots per millisecond) well under that threshhold:

Our system has the unique characteristic that the plasma is touchable. It was found that the contact between plasma and a finger causes a brighter light. This effect can be used as a cue of the contact. One possible control is touch interaction in which floating images change when touched by a user. The other is damage reduction. For safety, the plasma voxels are shut off within a single frame (17 ms = 1/60 s) when users touch the voxels. This is sufficiently less than the harmful exposure time (2, 000 ms).

Even cooler, you can apparently feel the plasma as you touch it:

Shock waves are generated by plasma when a user touches the plasma voxels. The user feels an impulse on the finger as if the light has physical substance. The detailed investigation of the characteristics of this plasma-generated haptic sensation with sophisticated spatiotemporal control is beyond the scope of this paper.

Well, that’s too bad, but maybe we’ll get more details in the next paper.

As you can see from the pics and video, these displays are tiny: the workspace encompasses just eight cubic millimeters. The spatiotemporal resolution is relatively high, though, at up to 200, 000 voxels per second, and the image framerate depends on how many voxels your image needs.