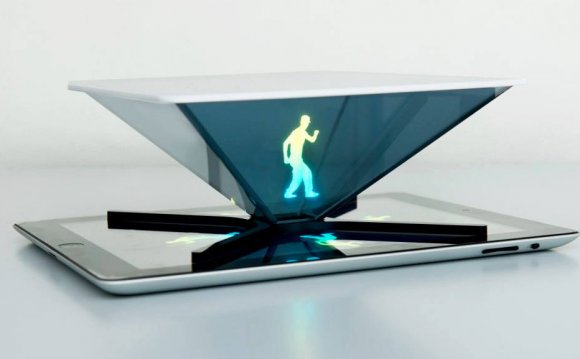 HOLHO. It's like a portmanteau of Holla! and Jai Ho! And the contraption is an Italian design, so we've got some real cultural diversity going on here in the world of holograms. A pyramid-shaped structure that sits on top of or underneath smartphones and tablets, HOLHO gathers selected screen images and projects them onto its 4 walls to generate a hologram floating harmoniously in the center. Look at that one there of the earth. Beautifully suspended in peace. Haha. What an optical illusion.

The HOLHO Phone Pyramid and HOLHO Pad Pyramid function similarly: they divide a selected flat image into 4 parts, and then use the physics of reflection and tomfoolery to generate the appearance of a hovering, three-dimensional object. HOLHO Pyramids for smartphones suit Android and iOS, and those for tablets fit both 7" and 10" devices.

A third and fourth style, the HOLHO Zed and HOLHO 3 Faces Pyramid were each made for 10" tablets. The first is a "Z" shape with a transparent photo frame and holographic modifications for pictures, and the second, which caters to commercial needs and demonstrations, is more of a "C" shape, with a top drawer for tablet housing and the hologram projected in the center.

Big spenders can also invest in the HOLHO Full Play, which functions independently, without a smartphone or tablet. It includes a 16" LED monitor, a 16" HOLHO Pyramid, a 16" HOLHO Naked (front-projecting hologram maker), and 20 videos.

HOLHOs operate with their complementary (as in symbiotic, not free) apps, which allow users to produce videos for holographic projection. Maker Imagination Farm has also released-and will continue to generate-its own series of image videos for users to beam into the Pyramid.

November 2013 Update: While HOLHO initially sought Kickstarter funding, the company canceled its first campaign, and did not reach its funding goal on a second attempt. However, the devices do appear to be available for purchase directly through the HOLHO Website-follow the link below.