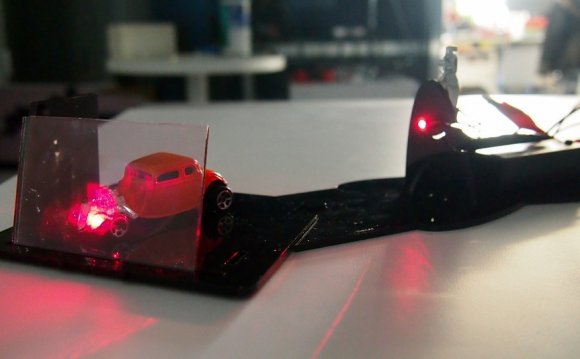 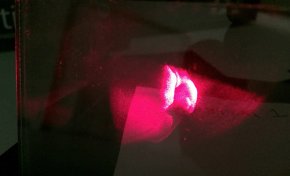 If I squinted and was careful to not stare directly into the laser beam, I could see the tiny hologram I had just created. It was not the thrilling moment I had anticipated.

And that pretty much sums up my experience with the Litiholo Hologram Kit, a $99.99 product that promises to let you create your own “awesome” hologram. Kind of cool? Yes. Awesome? Not so much.

Before we dive into the product, you should know that what the Litiholo kit creates are better described as holographic images instead of holograms. The results do not stand alone in three-dimensional space like the image of Princess Leia in Star Wars — Episode IV: A New Hope.

To be fair, that kind of free-standing hologram is exceedingly rare. In fact, most of the "holograms" we see today are on credit cards (that shiny little floating bird in the corner) and the not-really-holograms of dead musicians performing in concert (I’m looking at you, Tupac).

Litiholo creates something in between. It uses a real laser, but you have to look through a glass film to see the final image.

The box comes with a collection of plastic parts, wires with alligator clips, a red laser diode and even a toy car. The simple printed instructions guide you through setup, which includes building a special stand for the laser diode. Even with all these oddly shaped and seemingly random parts, it only takes a few minutes to put it all together.

Setting up the laser diode, which is a half-inch long copper barrel with two long wires trailing out of it, takes a bit more care. You actually have to unscrew the head, which contains the lens, remove a spring and then place it in a pre-cut hole in the stand. The directions neglect to tell you you’ll have to screw that head back on — I figured it out. To power the laser, you connect a battery pack (two AAs) to the laser's long lead wires using an included pair of alligator clips.

The plastic stand has an etched spot on the base for the hologram subject. This is your first indication of how limited the Litiholo’s kit is. It actually ships with a Matchbox-sized car, which is essentially the maximum size for objects you can try to turn into a hologram.

Before you can start, though, you have to position a piece of paper behind the object and then adjust the laser until the beam is scattered across the object and the paper. Once again, the instruction just tells you to “adjust” but doesn’t guide you on how to do it. It was clear to me that I could rock the laser back and forth to adjust the laser vertically, but I was not sure if I was allowed to move the laser further away from the object to further spread the beam. I did whatever adjustment I could and then moved the next step.

Litiholo ships two small boxes of C-RT20 "Instant Hologram" laser-sensitive film with the kit (you can buy more on the site: $79 for a box of 20). It’s sensitive to light and, especially, laser beams. We did our best to cut our available light and then I used the included blue diode to light up my workspace.

I have to admit I was a little surprised to discover that each piece of laser film was actually a 2 x 3-inch sheet of glass. I was careful not to touch either side of the sheet as I removed it from the packaging, but it would have been nice to know which side contained the laser-sensitive film.

I carefully placed the glass behind the toy car (it leans forward against the stand) and then removed the included black cardboard I was using to block the laser beam. Then I waited almost 10 minutes, being careful to talk and move as little as possible since Litiholo warns that vibrations are the enemy of holograms.

If you look carefully, you'll see that this is a hologram of the top of a Grumpy Cat 3D-printed figurine.

Finally, it was time to see the first hologram I had ever made in my entire life, I was so excited until I realized that the only way to view the hologram was by shining the laser light through the exposed glass and then perfectly positioning myself on the other side to see the 3D recreation of the car. I also had to do this without looking directly into the laser. I could make out the front end of the car and the rest of it only partly in the background.

We tried this a few more times with limited results. The images are so laser-grainy that the best way to tell what you’re looking at is to move your head around a bit — kind of like running fast past fence slats to see what’s going on over the other side. Perhaps I would have had better luck in a more light-proof room, but then how many people have those or want to do this only at night?

If you are desperate to create holograms, this kit will let you do it. Just remember the resulting images are tiny, hard to see, on breakable glass and you can’t view them without a laser.

Essentially Lithiholo Hologram Lens Kit is a cool science experiment more suited for the classroom than the home. It's also definitely not for children.

Creating your own holograms is a great idea, but the Litiholo Hologram Kit is better at creating frustration.

Who's are whose? When improvement exam held? Where object not like powershell? Who's and whose examples? Where to graph 3 2? How much intelligence for moonveil? Where to import cheap clothes? When leaders leave? How much subject in commerce? Where grow peanuts? How skills work in 5e? How often should you use a stepper? What are facility charges? Where to write subject in a letter? Which challenge contestants have died? Why engineering management? Where does brisket come from diagram? How often do city employees get paid? How meaning in english? How many recruiters do i need? How overcome stress? What maintenance can a pilot perform? When should you give up on something? How far along is ai? How much research for cardiology fellowship? Whom challenge game? When is workshop closing? How much leader on fly line? Where algorithm came from? The distance between us book summary? Who theory dad wwe? How much influence does a recruiter have? How much leadership time should i get? How much vacancy in indian army? How often does the challenge air? How many facilities does goat have? Generation where to watch? Subject where x is found? Where to buy classification labels? How much transfer fee western union? Why object object javascript? Where to meaning in telugu? What skills are employers looking for? Who is the world's greatest architect? Where internet was invented? Where to use influence? Where to book theory test? Can't help myself daxten lyrics? Blogger who went missing? How create a gmail account? Where degree symbol keyboard? How often is the international classification of diseases updated? Where subject complement? Which generation airpods do i have? How industrial boilers work? Who won the first challenge? Where to find theory for research? Which career should i choose? What challenge was archie doing? How to find engineering job? From where sentence examples? Where to improve guts persona 5? How to develop the skills? Where do degrees come from? Areas where improvement? Why questions for kids? Where to online furniture? How many questions are on the permit test in pa? Where do babies come from challenge? Who industrialized second? How far should an object be from the pole of a concave mirror? Where work definition? How much leader line to use? Where to watch generation? Where did mcnamara transfer from? Where to get degree certificate? How many marketing emails is too many? Which object is shown below? How much land summary? How far is santa's workshop from me? What are the 5 types of marketing? A person whose interview is taken? Why important is bad css? How many theory of play are there? Whose theory dad? Where to service omega watch in singapore? Where meaning in malayalam? Where is ups regional origin facility? An equation whose degree is 1 is known as? How often does favorite win kentucky derby? Who's your internet service provider? How to favorite items in terraria? When answers aren't enough lyrics? Theory where everything is connected? When math matters? How much transfer fee for car? Where to turn in passport application? How activities are linked using intent? How many research tasks pokemon go?
Source: mashable.com