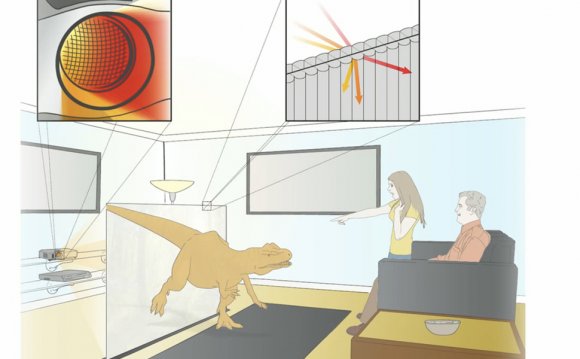 Hologram from LCD Projector
This equipment allows you to project a (very low resolution) hologram from an ordinary projector. I had seen a video on how to do this kind of thing somewhere, so I modified it some and it actually worked! It does still need improvement, though - the image can still be seen behind the hologram, and the image doesn't change when moving side to side. Currently it is clear enough to identify what you're seeing in the hologram, but not enough to see details (can anyone figure out what it is that's playing in the video?).

At the end of the video is the setup of the devices you need:

Steps:
Fill the humidifier with water and turn it on. Place/suspend a bundle of straws above the vent - if they're too close they might get a bit singed. Once the steam cloud begins rising from the straws, point the projector at it and shine an image onto the cloud.

Improvements:
It might be possible to improve the image quality by lengthening the straws, or by adding a low-power fan beneath them (if the fan is too strong then the cloud will be blown around too much; I've tried). Making the image 3-dimensional would probably require a 3D projector or two projectors with slightly different images.

DIY How To Make 3D Hologram Projector for your phone

How to Make A 3 D Hologram Projector