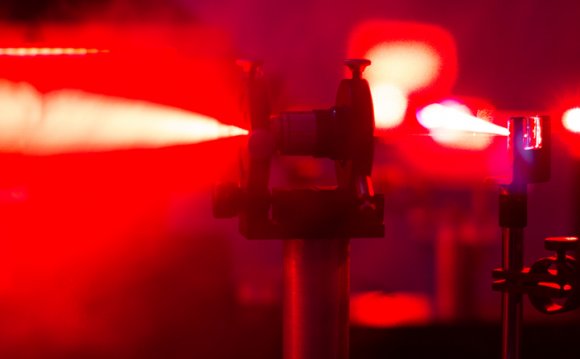 Holography, means of creating a unique photographic image without the use of a lens. The photographic recording of the image is called a hologram, which appears to be an unrecognizable pattern of stripes and whorls but which—when illuminated by coherent light, as by a laser beam—organizes the light into a three-dimensional representation of the original object.

An ordinary photographic image records the variations in intensity of reflected from an object, producing dark areas where less light is reflected and light areas where more light is reflected. Holography, however, records not only the intensity of the light but also its phase, or the degree to which the wave fronts making up the reflected light are in step with each other, or coherent. Ordinary light is incoherent—that is, the phase relationships between the multitude of waves in a beam are completely random; wave fronts of ordinary light waves are not in step.

Dennis Gabor, a Hungarian-born scientist, invented holography in 1948, for which he received the Nobel Prize for Physics more than 20 years later (1971). Gabor considered the possibility of improving the resolving power of the electron microscope, first by utilizing the electron beam to make a hologram of the object and then by examining this hologram with a beam of coherent light, as shown in Figure 1. In Gabor’s original system the hologram was a record of the interference between the light diffracted by the object and a collinear background. This automatically restricts the process to that class of objects that have considerable areas that are transparent (see Figure 1A). When the hologram is used to form an image, twin images are formed, as illustrated in Figure 1B. The light associated with these images is propagating in the same direction, and hence in the plane of one image light from the other image appears as an out-of-focus component. Although a degree of coherence can be obtained by focusing light through a very small pinhole, this technique reduces the light intensity too much for it to serve in holography; therefore, Gabor’s proposal was for several years of only theoretical interest. The development of lasers in the early 1960s suddenly changed the situation (see laser). A beam has not only a high degree of coherence but high intensity as well.

Of the many kinds of laser beam, two have especial interest in holography: the continuous-wave (CW) laser and the pulsed laser. The CW laser emits a bright, continuous beam of a single, nearly pure colour. The pulsed laser emits an extremely intense, short flash of light that lasts only about 1/100, 000, 000 of a second. Two scientists in the United States, Emmett N. Leith and Juris Upatnieks of the University of Michigan, applied the CW laser to holography and achieved great success, opening the way to many research applications.

In essence, the problem Gabor conceived in his attempt to improve the electron microscope was the same as the one photographers have confronted in their search for three-dimensional realism in photography. To achieve it, the light streaming from the source must itself be photographed. If the waves of this light, with their multitude of rapidly moving crests and troughs, can be frozen for an instant and photographed, the wave pattern can then be reconstructed and will exhibit the same three-dimensional character as the object from which the light is reflected. Holography accomplishes such a reconstruction by recording the phase content as well as the amplitude content of the reflected light waves of a laser beam. How this works is shown in Figure 2 on the left.