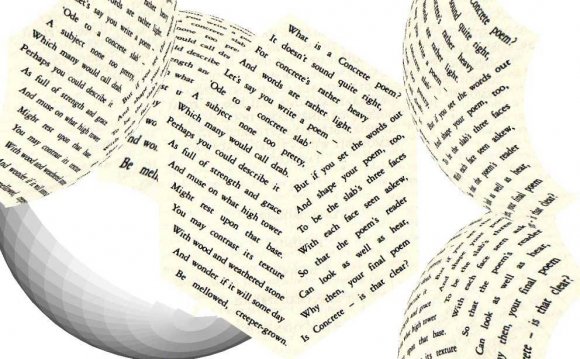 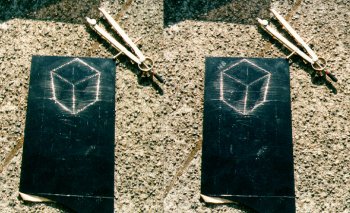 Depending on the tilt of the plate with respect to the sun, you might accidentally discover the "pseudoscopic" image of the "V, " and it may appear to float *above* the surface of the plastic. Tilt the plate to bring the far edge up and towards you and you'll then find the "orthoscopic" image floating deep within the plate.

If you had inscribed your entire name on the plastic, you'd now be seeing it down there within the surface. (hint hint!) It's also possible to draw complicated 3D objects by varying the compass spacing as you slowly draw glowing lines one point at a time. The distance between the compass points controls the depth of the hologram-dots you are making. I've been drawing cubes, pyramids, and holes with glowing stars at the bottom. As with conventional holograms, opacity effects can be achieved by controlling the location of the endpoints of the scratches. And many other sophisticated effects produced by conventional rainbow holography can be duplicated in black plastic and scratch patterns.

All this all started while I was walking along the rows of cars in the parking lot at work. I noticed this one black station wagon hood that had a number of glowing highlights created by the sunlight. Typical science hobbyist response: I stopped and began playing with them. I was moving my head back and forth in order to make them slide around, when I noticed that some of the highlights seemed to exist a few inches WITHIN the surface of the car hood. I've long been interested in stereo images, so I started examining these "deep" highlights in detail. Some of the larger ones had an interesting structure, appearing as an 8 in. circular blotch of light with a radial pattern of filaments and a mottled central area. All these highlight-patterns seemed identical, and were floating at various depths within the car hood. The handprints in the above photo might appear to be on the surface of the hood, but in real life they look holographic and seem to float about one foot deep within the surface of the hood. Appears like white fishes in a dark pond.

With a start I suddenly I realized what I was seeing. It was incredible: each highlight was in the shape of a wool polishing mit, with matted fibers in the center surrounded by outwards-pointing wooly filaments! The matted part was in the shape of a human hand! There were several of them floating at various depths all over the car hood, with some of them even floating in space *above* the hood. They had been invisible to me, but then they weren't. Science is perception! It wasn't long before I had half the optosensor engineering department out there acting like fools, moving their heads back and forth in front of this black station wagon. I searched through the rest of the sunlit parking lot and found several other cars with glowing distorted handprints deep within various surfaces. Once you realized they were handprints, the shape was unmistakable.

I proposed several crude theories to explain the phenomena, as well as numerous hoaxes which could be done via Elvis-shaped polishing mitts to encode miraculous images onto everyday objects. (The Hood of Turin?) It was about a week before I figured out what was really going on. The images were naturally-occurring holograms. The owner of the car had obviously polished the hood with a dirty lambswool mitt, and the millions of particles of grit in the mitt traced out millions of nearly-parallel scratches in the black paint. The particular hand motion had created a geometry of abrasion patterns which turn out to be nearly identical to the interference patterns which make up those embossed-foil whitelight Benton rainbow holograms.