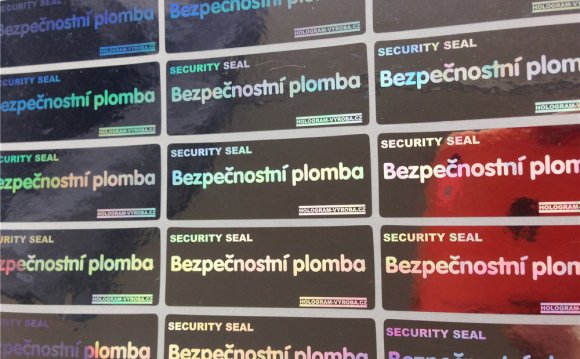 A hologram label on a paper box for security

Security holograms are labels with a hologram printed onto it for sale security reasons. Security holograms are very difficult to forge because they are replicated from a master hologram which requires expensive, specialized and technologically advanced equipment. They are used widely in several banknotes around the world, in particular those that are of high denominations. They are also used in passports, credit and bank cards as well as quality products. Herman Lopata, the President of the New York-based Automatic Toll Systems, Inc., received a patent in 1987 for the credit card security hologram as part of his early work on high speed highway toll collection—the predecessor of the modern EZ Pass type equipment.

Holograms are classified into different types with reference to the degree of level of optical security incorporated in them during the process of master origination. The different classifications are described below:

These are by far the most common type of hologram - and in fact they are not holograms in any true sense of the words. The term "hologram" has taken on a secondary meaning due to the widespread use of a multilayer image on credit cards and driver licenses. This type of "hologram" consists of two or more images stacked in such a way that each is alternately visible depending upon the angle of perspective of the viewer. The technology here is similar to the technology used for the past 50 years to make red safety night reflectors for bicycles, trucks, and cars. These holograms (and therefore the artwork of these holograms) may be of two layers (i.e. with a background and a foreground) or three layers (with a background, a middle ground and a foreground). In the case of the two-layer holograms, the matter of the middle ground is usually superimposed over the matter of the background of the hologram. These holograms display a unique multilevel, multi-colour effect. These images have one or two levels of flat graphics “floating” above or at the surface of the hologram. The matter in the background appears to be under or behind the hologram, giving the illusion of depth.

These holograms have a maximum resolution of 10 micrometres per optical element and are produced on specialized machines making forgery difficult and expensive. To design optical elements, several algorithms are used to shape scattered radiation patterns.

These types of hologram are created using highly sophisticated and very expensive electron-beam lithography systems. This kind of technology allows the creation of surface holograms with a resolution of up to 0.1 micrometres (254, 000 dpi). This technique requires development of various algorithms for designing optical elements that shapes scattered radiation patterns. This type of hologram offers features like the viewing of four lasers at a single point, 2D/3D raster text, switch effects, 3D effects, concealed images, laser readable text and true colour images.

The various kinds of features possible in security holograms are mentioned below:

These usually take the form of very thin lines and contours. Concealed images can be seen at large angle light diffraction, and at one particular angle only.

They can be seen when the conditions of hologram observations are being changed. Turning or inclining the hologram allows the movements of certain features of the image to be studied.

Dot matrix holograms also support CLR imagery, where a simple laser device may be used to verify the hologram's authenticity. Computing CLR images is a complicated mathematical task that involves solving ill-posed problems. There are two types of CLR: Dynamic CLR and Multigrade CLR. Dynamic CLR is a set of CLR fragments that produce animated images on the screen as the control device moves along the hologram surface. Multigrade CLR images produce certain images on the screen of the controlling device, which differ in the first and minus first orders of laser light diffraction. As a variant, a hidden image which is both negative and positive, in plus one and minus one order respectively, may be created.