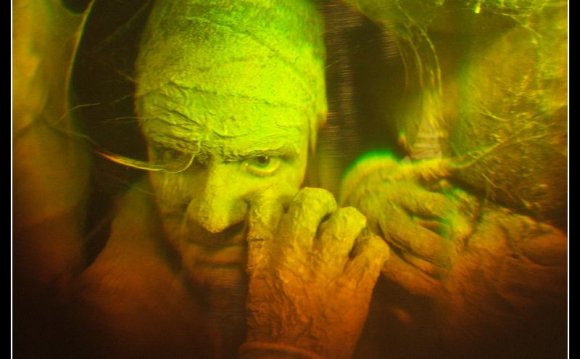 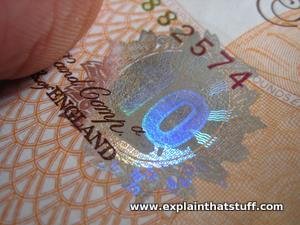 How many holograms have you got in your pocket? If you're carrying any money, the answer is probably "quite a few." Holograms are those shiny, metallic patterns with ghostly images floating inside them that help to defeat counterfeiters: they're very hard to reproduce so they help to stop people printing illicit copies of banknotes. Credit cards usually have holograms on them too and software packages also frequently have hologrammatic seals to prove their authenticity. What else can you use holograms for? Let's take a closer look at what they are and how they're made!

Photo: The security hologram on a banknote helps to stop people making fake copies. Holograms are harder to reproduce than other security devices.

How can you store a beam of light?

Light is an amazing form of energy that zaps through our world at blistering speeds: 300, 000 km (186, 000 miles) per second—enough to whip from the Sun to Earth in just over 8 minutes. We see things because our eyes are sophisticated light detectors: they constantly capture the light rays bouncing off nearby objects so our brain can construct an ever-changing impression of the world around us. The only trouble is that our brain can't keep a permanent record of what our eyes see. We can recall what we thought we saw, and we can recognize images we've seen in the past, but we can't easily recreate images intact once they've disappeared from view. 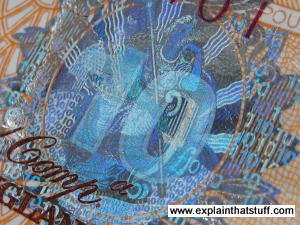 Back in the 19th century, ingenious inventors helped to solve this problem by discovering how to capture and store images on chemically treated paper. Photography, as this became known, has revolutionized the way people see and engage with the world—and it gave us fantastic forms of entertainment in the 20th century in the form of movies and TV. But no matter how realistic or artistic a photograph appears, there's no question of it being real. We look at a photo and instantly see that the image is dead history: the light that captured the objects in a photograph vanished long ago and can never be recaptured.

What is a hologram?

Holograms are a bit like photographs that never die. They're sort of "photographic ghosts": they look like three-dimensional photos that have somehow got trapped inside glass, plastic, or metal. When you tilt a credit-card hologram, you see an image of something like a bird moving "inside" the card. How does it get there and what makes it seem to move? What makes it different from an ordinary photograph? 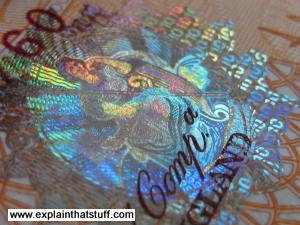 Suppose you want to take a photograph of an apple. You hold a camera in front of it and, when you press the shutter button to take your picture, the camera lens opens briefly and lets light through to hit the film (in an old-fashioned camera) or the light-sensitive CCD chip (in a digital camera). All the light traveling from the apple comes from a single direction and enters a single lens, so the camera can record only a two-dimensional pattern of light, dark, and color.

If you look at an apple, something different happens. Light reflects off the surface of the apple into your two eyes and your brain merges their two pictures into a single stereoscopic (three-dimensional) image. If you move your head slightly, the rays of light reflected off the apple have to travel along slightly different paths to meet your eyes, and parts of the apple may now look lighter or darker or a different color. Your brain instantly recalculates everything and you see a slightly different picture. This is why your eyes see a three-dimensional image. 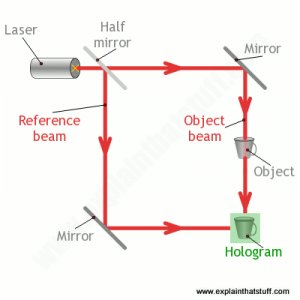 How do you make a hologram?

You make a hologram by reflecting a laser beam off the object you want to capture. In fact, you split the laser beam into two separate halves by shining it through a half-mirror (a piece of glass coated with a thin layer of silver so half the laser light is reflected and half passes through—sometimes called a semi-silvered mirror). One half of the beam bounces off a mirror, hits the object, and reflects onto the photographic plate inside which the hologram will be created. This is called the object beam. The other half of the beam bounces off another mirror and hits the same photographic plate. This is called the reference beam. A hologram forms where the two beams meet up in the plate. 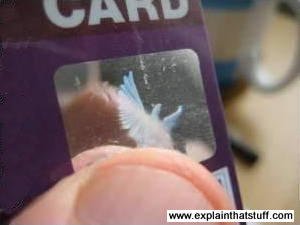 When a laser beam is split up to make a hologram, the light waves in the two parts of the beam are traveling in identical ways. When they recombine in the photographic plate, the object beam has traveled via a slightly different path and its light rays have been disturbed by reflecting off the outer surface of the object. Since the beams were originally joined together and perfectly in step, recombining the beams shows how the light rays in the object beam have been changed compared to the reference beam. In other words, by joining the two beams back together and comparing them, you can see how the object changes light rays falling onto it—and that's simply another way of saying "what the object looks like." This information is burned permanently into the photographic plate by the laser beams. So a hologram is effectively a permanent record of what something looks like seen from any angle.

Now this is the clever part. Every point in a hologram catches light waves that travel from every point in the object. That means wherever you look at a hologram you see exactly how light would have arrived at that point if you'd been looking at the real object. So, as you move your head around, the holographic image appears to change just as the image of a real object changes. And that's why holograms appear to be three-dimensional. Also, and this is really neat, if you break a hologram into tiny pieces, you can still see the entire object in any of the pieces: smash a glass hologram of a cup into bits and you can still see the entire cup in any of the bits! (You can see a demonstration in this great video of cutting up a hologram and Hyperphysics has a more detailed explanation of exactly what we mean when we say "a piece of a hologram contains the whole object".)

How Digital Photography Changed the Moon into a Hologram ...