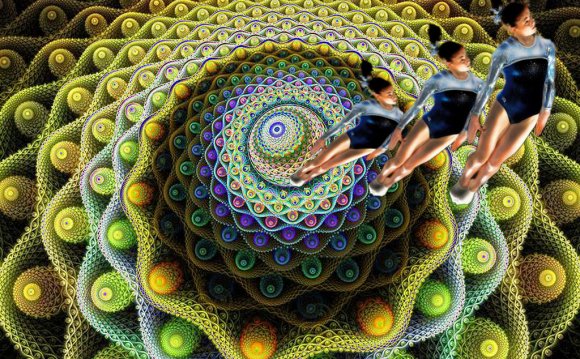 Believed that these findings imply that objective reality does not exist, that despite its apparent solidity the universe is at heart a phantasm, a gigantic and splendidly detailed hologram.

Within a hologram, the whole is within the part. No matter how many times you divide the whole, the part will always contain it’s totality.

Just as higher consciousness realizations show that each part, as seemingly small or separate it is from total reality and the Source of reality itself, contains that very Source and vice versa.

The deduction from the holographic experiments conclude that autonomy and separateness are an illusion (maya) and that all is one.

Oneness is a concept found in seemingly every major belief system ever manifested within the realm of human consciousness, so it only emboldens recent discoveries pertaining to our manifested reality. If this indeed is the case, (and enough evidence shows that it is) then the universe is itself a projection, a hologram.

If the apparent separateness of subatomic particles is illusory, it means that at a deeper level of reality all things in the universe are infinitely interconnected.

The electrons in a carbon atom in the human brain are connected to the subatomic particles that comprise every salmon that swims, every heart that beats, and every star that shimmers in the sky. Oneness prevails.

In a holographic universe, even time and space could no longer be viewed as fundamentals. Because concepts such as location break down in a universe in which nothing is truly separate from anything else, time and three-dimensional space, like the images of the fish on the TV monitors, would also have to be viewed as projections of this deeper order.

At its deeper level reality is a sort of super-hologram in which the past, present, and future all exist simultaneously.

The three-dimensional universe we live in is the hologram created out of a primary reality that is outside space and time so it is a copy of something “real” so it would make sense in such a case that our real self is in another reality.

To further build the case for a holographic reality, consider the following:

All relative realities are created by consciousness existing in relation to itself.

There is nothing else. None of the things we perceive as separate have an independent existence, as all are in actuality relational extensions of the underlying unity of consciousness. Physical reality is a product of consciousness.

Consciousness is not a product of physical reality.

Physical reality does not interact with itself in some unknown fashion to cause consciousness to come into existence. Consciousness in the process of repeated and progressive self-relation becomes the awareness of experience, and thus creates physical reality.

There are realizations concerning the nature of the universe being a holographic projection, through the experience of enlightenment. Once enlightenment is experienced, one can understand exactly how the holographic universe operates and is indeed, very real.

There comes an understanding that we are multidimensional beings that exist simultaneously in many levels of quantum reality.

There is no reason to get annoyed, angry, stressed, etc over the things that happen in one’s physical reality, which is the lowest dimension of our awareness, because it is all trivial in the grand scheme of things.

Focusing on the specifics of reality may divert one’s self from discovering and realizing the reason he or she exists right now. This is why one of the steps to becoming enlightened is to replace fear and anger with wonder and curiosity.

Have you experienced a shift in perception concerning reality yet? At the very least, hopefully you are able to now expand your mind to realms previously unvisited. Reality is a mysterious and exciting place.