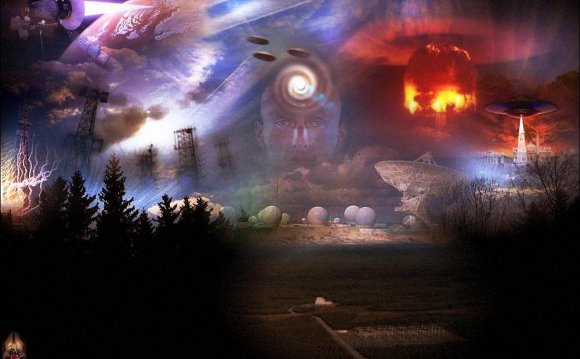 The first step concerns the breakdown of all archeological
knowledge. It deals with the setup with artificially created earthquakes at certain precise locations on the planet where, supposedly, new discoveries will finally explain to all people the error of all fundamental religious doctrines. The falsification of this information will be used to make all nations believe that their religious doctrines have been misunderstood for centuries and misinterpreted. Psychological preparations for that first step have already been implemented with the film, "2001: A Space Oddessy;" the StarTrek series, and "Star Wars;" all of which deal with invasions from space and the coming together of all nations to repel the invaders. The last films, "Jurrassic Park, " deals with the theories of evolution, and claim God's words are lies.

What is important to understand in the first step is that those earthquakes will hit at different parts of the world where scientific and archeological teachings have indicated that arcane mysteries have been buried. By those types of earthquakes, it will possible for scientists to re-discover those arcane mysteries which will be used to discredit all fundamental religious doctrines. This is the first preparation for the plan for humanity because what they want to do is destroy the beliefs of all Christians and Muslims on the planet. To do that, they need some false "proof" from the far past that will prove to all nations that their religions have all been misinterpreted and misunderstood.

The second step involves a gigantic "space show" with three-dimensional
optical holograms and sounds, laser projection of multiple holographic
images to different parts of the world, each receiving a different image according to predominating regional national religious faith. This new "god's" voice will be speaking in all languages. In order to understand that, we must study various secret services' research done in the last 25 years.

The Soviet's have perfected an advanced computer, even
exported them, and fed them with the minute physio-psycological
particulars based on their studies of the anatomy and electro-mechanical composition of the human body, and the studies of the electrical, chemical and biological properties of the human brain.

These computers were fed, as well, with the languages of all human cultures and their meanings. The dialects of all cultures have been fed into the computers from satellite transmissions. The Soviets began to feed the computers with objective programs like the ones of the new messiah. It also seems that the Soviets - the new world order people - have resorted to suicidal methods with the human society by allocating electronic wavelengths for every person and every society and culture to induce suicidal thoughts if the person doesn't comply with the dictates of the new world order.

There are two different aspects of step two. The first
is the "space show." Where does the space show come from? The space
show, the holographic images will be used in a simulation of the ending
during which all nations will be shown scenes which will be the
fulfillment of that which they desire to verify the prophecies and
adversary events. These will be projected from satellites onto the
sodium layer about 60 miles above the earth. We see tests every once in
a while, but they are called UFOs and "flying saucers." The result of
these deliberately staged events will be to show the world the new
"christ, " the new messiah, Matreya, for the immediate implementation of
the new world religion. Enough truth will be foisted upon an
unsuspecting world to hook them into the lie. "Even the most learned
will be deceived." The project has perfected the ability for some device to lift up an enormous number of people, as in a rapture, and whisk the entire group into a never-never land. We see tests of this device in the abduction of humans by those mysterious little alien greys. who snatch people out of their beds and through windows into waiting "mother ships."

The calculated resistance to the universal religion and the new
messiah and the ensuing holy wars will result in the loss of human life
on a scale never imagine before in all of human history. The Blue Beam
Project will pretend to be the universal fulfillment of the prophecies
of old, as major an event as that which occurred 2, 000 years ago. In
principle, it will make use of the skies as a movie screen (on the
sodium layer at about 60 miles) as space-based laser-generating
satellites project simultaneous images to the four corners of the planet in every language and dialect according to the region. It deals with the religious aspect of the new world order and is deception and seduction on a massive scale. Computers will coordinate the satellites and software already in place will run the sky show.

Holographic images are based on nearly identical signals combining to produce an image or hologram with deep perspective which is equally applicable to acoustic
ELF, VLF and LF waves and optical phenomena. Specifically, the show will consist of multiple holographic images to different parts of the world, each receiving a different image according to the specific national, regional religion. Not a single area will be excluded. With computer animation and sounds appearing to emanate from the very depths of space, astonished ardent followers of the various creeds will witness their own returned messaihs in convincing lifelike reality. Then the projections of Jesus, Mohammed, Buddah, Krishna, etc., will merge into one after correct explanations of the mysteries and revelations will have been disclosed. This one god will, in fact, be the antichrist, who will explain that the various scriptures have been misunderstood and misinterpreted, and that the religions of old are responsible for turning brother against brother, and nation against nation, therefore old religions must be abolished to make way for the new age new world religion, representing the one god antichrist they see before them.

Naturally, this superbly staged falsification will result in dissolved social and religious disorder on a grand scale, each nation blaming the other for the deception, setting loose millions of programmed religious fanatics through demonic possession on a scale never witnessed before.

In addition, this event will occur at a time of profound worldwide
political anarchy and general tumult created by some worldwide
catastrophe. The United Nation even now plans to use Beethovan's "Song