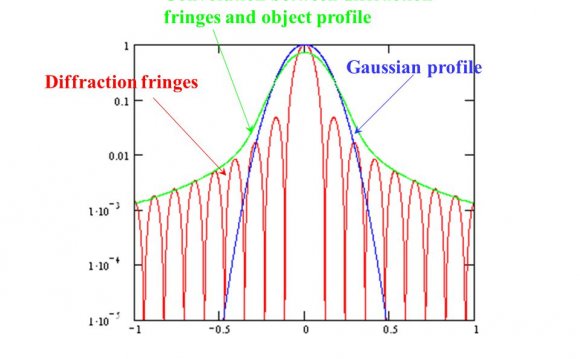 Diffraction Grating is optical device used to learn the different wavelengths or colors contained in a beam of light. The device usually consists of thousands of narrow, closely spaced parallel slits (or grooves). Because of interference the intensity of the light getting pass through the slits depends upon the direction of the light propagation. There are selected directions at which the light waves from the different slits interfere in phase and in these directions the maximums of the light intensity are observed. These selected directions depend upon wavelength, and so the light beams with different wavelength will propagate in different directions. The condition for maximum intensity is the same as that for the double slit or multiple slits, but with a large number of slits the intensity maximum is very sharp and narrow, providing the high resolution for spectroscopic applications. The peak intensities are also higher and depend proportionally to the second power of amount of the slits illuminated.

In the beginning let us consider the diffraction from double slit, which consists of two parallel slits illuminated by a flat monochromatic wave. Calculations show that the intensity of the light getting pass through the slits will depend upon the angle j between the direction of the light propagation and the perpendicular to screen:

where 0 is the intensity of the light in the center of diffraction pattern when only one slit is opened, b is the width of the slit, is the distance between the slits, =2p /l is the wave factor, l is the wavelength, D is the difference of the optical lengths of the interfering rays (in the case, for example, when the wave is incident not perpendicularly to the screen or one slit is covered by glass). The first multiplier of the equation in the square brackets describes the Fraunhofer diffraction on one slit and the second multiplier describes the interference from two point sources. The total energy of the light getting through the slit is proportional to b, while the width of the diffraction pattern is proportional to 1/b. For this reason the intensity of the light 0 in the center of diffraction pattern will be proportional to b2. In the limits of the first diffraction maximum we can see interference fringes, where =2/b.

Talking about "Fraunhofer" diffraction we mean the far-field diffraction, i.e. when the point of observation is far enough from the screen with the slits. Quantitatively the criteria of the Fraunhofer diffraction is described by the formula:

It is seen from the figure that sin

j is the path length difference between the rays emitted by the slits. If it is equal to the integer number, then the oscillations will interfere in phase magnifying each other. Therefore, we can write the equation for the main maximums of interference pattern: sinj= l, where = 0, 1, 2,
Source: physics-animations.com