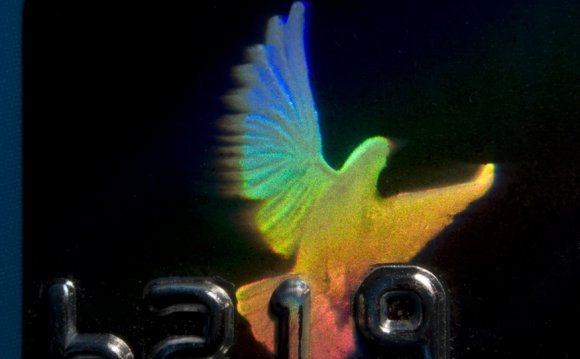 You've probably got a hologram in your pocket or purse right now. Just look at a credit card. One of my cards has a dove hologram on it, another has a map of the world. Why do our credit cards have holograms on them?

A hologram is essentially a three-dimesional photograph. However, it takes much more work to make a hologram than it does for an ordinary two-dimensional photograph. In order to make a hologram, we need to use lasers which produce coherent light; that is, light whose waves are in phase, peak-to-peak and trough-to-trough. The property of coherence allows laser light to interfere with itself quite nicely and produce interference patterns on paper that we can reproduce.

A hologram is basically a reproduction of the "interference pattern" of laser light that's been shined on something. Let's say we had a coffee cup and we shone some laser light on it. However, we didn't shine all of the light on the cup. Some we diverted directly onto the photographic paper (the reference beam). The rest of the laser light (the object beam) shines on the cup, and is then reflected onto the paper. These two beams interfere with each other, causing a specific pattern of bright and dark spots where there has been constructive and destructive interference, spots where the waves added and subtracted.

It's the interference pattern that the photographic film records, unlike a regular photograph, which records the amount of light from a specific point (see the Pinhole Camera Reading for more info). Also, unlike the photograph, each point of the hologram contains all of the information from the object. So we could destroy almost all of our hologram and still reconstruct the image from a small piece.

To see the hologram, we have to shine light that's just like the reference beam onto the photographic film after it's been developed. To see the hologram made from a laser, we need to use a similar laser. Now do you see why it's so hard to duplicate a hologram?!