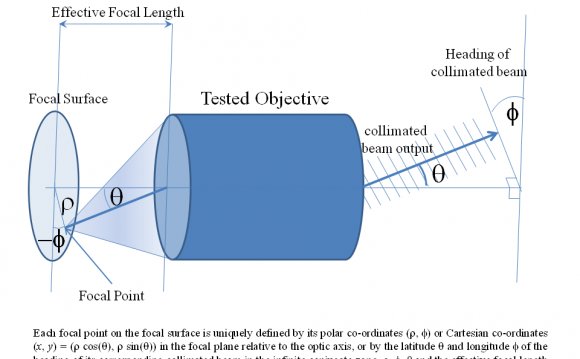 All waves are subject to diffraction when they encounter an obstacle in their path. Consider the shadow of a flagpole cast by the on the ground. From a the darkened zone of the shadow gives the impression that light traveling in a straight line from the Sun was blocked by the pole. But careful observation of the shadow's edge will reveal that the change from dark to light is not abrupt. Instead, there is a gray area along the edge that was created by light that was "bent" or diffracted at the side of the pole.

Fresnel diffraction refers to the case when either the source or the screen are close to the aperture. When both source and screen are far from the aperture, the term Fraunhofer diffraction is used. As an example of the latter, consider starlight entering a . The diffraction pattern of the telescope's circular mirror or is known as Airy's disk, which is seen as a bright central disk in the middle of a number of fainter rings. This indicates that the image of a will always be widened by diffraction. When optical instruments such as telescopes have no defects, the greatest detail they can observe is said to be diffraction limited.

The diffraction of light has been cleverly taken advantage of to produce one of science's most important tools—the diffraction grating. Instead of just one aperture, a large number of thin slits or grooves—as many as 25, 000 per inch—are etched into a material. In making these sensitive devices it is important that the grooves are, equally spaced, and have equal widths.

The diffraction grating transforms an incident beam of light into a . This happens because each groove of the grating diffracts the beam, but because all the grooves are parallel, equally spaced and have the same width, the diffracted waves mix or interfere constructively so that the different components can be viewed separately. Spectra produced by diffraction gratings are extremely useful in applications from studying the structure of and molecules to investigating the composition of stars.

are light waves that have very short wavelengths. When they irradiate a solid, material they are diffracted by the atoms in the crystal. But since it is a characteristic of crystals to be made up of equally spaced atoms, it is possible to use the diffraction patterns that are produced to determine the locations and distances between atoms. Simple crystals made up of equally spaced planes of atoms diffract x rays according to Bragg's Law. Current research using x-ray diffraction utilizes an instrument called a diffractometer to produce diffraction patterns that can be compared with those of known crystals to determine the structure of new materials.

When two beams mix at an on the surface of a photographic plate or other recording material, they produce an pattern of alternating dark and bright lines. Because the lines are perfectly parallel, equally spaced, and of equal width, this process is used to manufacture holographic diffraction gratings of high quality. In fact, any hologram (holos—whole: gram—message) can be thought of as a complicated diffraction grating. The recording of a hologram involves the mixing of a laser beam and the unfocused diffraction pattern of some object. In order to reconstruct an image of the object (holography is also known as wavefront reconstruction) an illuminating beam is diffracted by surfaces within the hologram, following Bragg's Law, such that an observer can view the image with all of its three-dimensional detail.

All waves are subject to diffraction when they encounter an obstacle in their path. Consider the shadow of a flagpole cast by the Sun on the ground. From a distance the darkened zone of the shadow gives the impression that light traveling in a straight line from the Sun was blocked by the pole. But careful observation of the shadow's edge will reveal that the change from dark to light is no…

Diffraction Its Implication and Uses in Ophthalmology ...