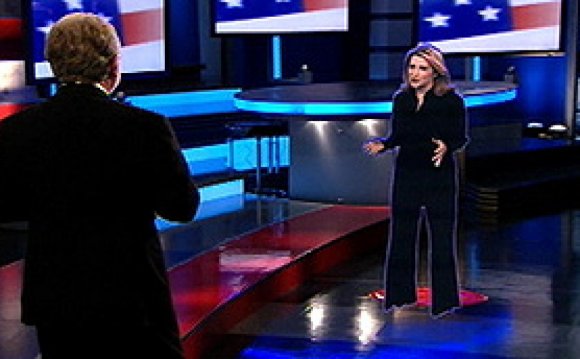 (CNN) - It was an election night like none other, in every sense of the phrase. In addition to the obvious - the selection of the nation's first black president - Tuesday night's coverage on CNN showcased groundbreaking technology. 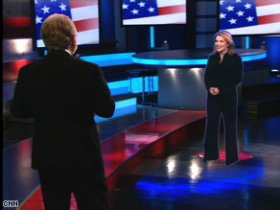 "I want you to watch what we're about to do, " CNN anchor Wolf Blitzer told viewers early in the evening's coverage, "because you've never seen anything like this on television."

And he was right. Cue CNN political correspondent Jessica Yellin.

"Hi Wolf!" said Yellin, waving to Blitzer as she stood a few feet in front of him in the network's New York City studios. Or at least, that's the way it appeared at first glance.

In reality, Yellin - a correspondent who had been covering Sen. Barack Obama's campaign - was at the now president-elect's mega-rally along the lakefront in Chicago, Illinois, more than 700 miles away from CNN's Election Center in New York.

It looked like a scene straight out of "Star Wars." Here was Yellin, partially translucent with a glowing blue haze around her, appearing to materialize in thin air. She even referenced the classic movie on her own, saying, "It's like I follow in the tradition of Princess Leia. It's something else."

Jay Leno has poked fun at the hologram, and mash-up spoofs that replace Yellin's voice with Carrie Fisher's lines from the movie already are making their way around the Internet.

But the million-dollar question on everyone's mind now: How'd they do it?

CNN dubbed it a "hologram" - a three-dimensional image that's been reproduced. And it's the brainchild of a few people. A hologram creates an image using coherent light, such as lasers; CNN's technique used conventional cameras to capture multiple images from different angles.

"About a dozen years, I've been trying to do it, " David Bohrman, CNN's senior vice president and Washington bureau chief, said to Blitzer on "The Situation Room" on Wednesday. "I've basically been a crazy mad scientist trying to get it done."

The technology involved placing a subject - in this case Yellin, and later in the evening, musical artist Will.i.am - in the middle of a bright-green circular room inside a large tent at Obama's Grant Park victory celebration.

The subject was then filmed with 35 high-definition video cameras, barely larger than average point-and-shoot cameras, which ringed the wall of the circular room. The video cameras were 6 inches apart and at eye level, 220 degrees around the subject.

Chuck Hurley, the Washington bureau's senior producer of video and the staffer tapped by Bohrman to manage the execution of the "hologram, " called it simple chroma-key technology that's been taken "to the Nth degree."

"Weathermen have been standing in front of green screens for years now, but that's [with] one camera, " Hurley said. "Now we can do that times 35, so you can send all the way around the subject."

Hurley said the tiny cameras "talk" to the New York studio's cameras, meaning that when a New York camera moves, it "tells" the cameras in the tent which direction it's moving and keeps the subject in the correct proportions.

On Tuesday night, Blitzer could only see Yellin on a TV monitor across the studio. Technicians placed a round piece of red laminate on the studio floor where she was "beamed in" so that Blitzer would know where to look.

Gal Oz, a SportVU designer who came to the United States to work with CNN on the endeavor, said it was originally designed "to create a matrix effect in sports" - in other words, to provide 360 degrees of perspective for instant replays.

But it hasn't been used for its intended purpose yet. Instead, for the past three months, the company has been perfecting it for CNN's election coverage, Oz said. Tuesday night's live interview of Yellin was essentially the technology's world debut as well.

Hurley and Oz agree that as good as the image looked on television Tuesday, it can look even more realistic. Hurley said the blue glow around Yellin and Will.i.am was added intentionally to avoid confusion.

"We could have had a much crisper, more realistic shot, almost to the extent where the viewer at home would have had no idea even that the person wasn't really there, " Hurley said.

"You don't want to have the effect where it looks so good that for every future live shot, you have people on the blogs saying, 'Oh they're not really there-they're in a studio, faking the moon landing.' "

Hurley said considering it was CNN's first real "test launch" with the high-end gadgetry, they were "beyond thrilled." That's not to say there weren't setbacks.

For all the preparation that went into the tent and green room in Chicago - a location CNN staffers dubbed "Casper" after the friendly cartoon ghost - there was an equally elaborate setup in Phoenix, Arizona, site of John McCain's election night rally. CNN correspondent Dana Bash was ready there for her turn in the portal as well.

But because the Arizona site didn't go through as much testing in the final hours, and because the election was called in Obama's favor earlier in the evening than many expected, Chicago's "Casper" was the only "hologram' venue put to use.

"We'll see. It was a little ornament on the tree, " Bohrman said. "But television evolves, and how we do things evolves, and at some point - maybe it's five years or 10 years or 20 years down the road - I think there's going to be a way that television does interviews like this because it allows for a much more intimate possibility for a remote interview."

The day after her virtual appearance in New York, Yellin said this kind of new technology is what keeps television news entertaining, even when it's presenting important political stories.

"We do serious journalism, but we also have fun. This is fun. This is about what we can do, about pushing the envelope and pushing the boundaries, " she said. "Someday when this is even more advanced, having a fuller visual field for interview subjects could give viewers even more of a sense of people."

Now, in hindsight, Yellin only wishes she could have come up with a better "Star Wars" joke.

"I was thinking of making an Obi-Wan Kenobi joke - Obi-Wolf Kenobi, " she said, laughing, "but I couldn't figure out the pun."