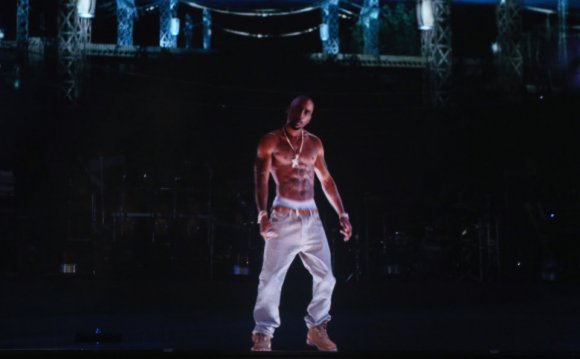 As it stands, the touchscreen experience is confined to a flat, two-dimensional world. Smartphones provide that essential pocketable portability, and if you’re willing to trade off on convenience, there are larger screen tablets. But for inventor Hussein S. El-Ghoroury, the next phase in the ongoing evolution of displays won’t involve any such compromises.

That’s because the founder and chief executive of Carlsbad, Calif.-based Ostendo Technologies is readying a potentially game-changing technology that may make its way into upcoming generations of connected gadgets. In such a scenario, visuals can be rendered three-dimensionally, as holograms. This means that tedious tasks, such as shopping for a couch on your smartwatch, would be made easier with the option of beaming up life-sized replications. Video conferencing will take on a futuristic “Star Wars” aesthetic, while streaming movies will look like something more akin to actual staged theater.

For the record, 3D-smartphone displays aren’t exactly new. In 2011, LG released the Optimus 3D, which simply creates the illusion of depth and requires the user to look straight-on to see this effect. Projected holograms, in contrast, are much more complicated and usually require an elaborate setup of lasers and mirror to display a source object in its three-dimensional entirety, which can be observed from any viewing angle.

An industry veteran and the former chief executive of mobile chipmaker CommQuest, El-Ghoroury has spent the last eight years homing in on a way to shrink the entire process down to a circuit the size of a piece of chewing gum. He made his first breakthrough using a technique that allowed silicon to effectively bond with light-emitting diodes, which he compares to mixing oil with water.

“For many years, it was about stacking silicon wafers to improve performance, ” he explained. “No one had really thought to do it to emit light for mobile devices, partially because solid-state materials (LED) don’t coalesce with it very well.”

The approach has several advantages. Each chipset is capable of producing a beam of light across a million pixels. Whereas Apple’s often-touted retina display has a resolution of 300 dots per inch, Ostendo’s Quantum Photonic Imager allows for 5, 000 dots per inch. And every element, including color, brightness and angle can be controlled using software. This opens the possibility of chips small enough to be incorporated seamlessly into eyeglasses and other wearables, or to turn a car’s windshield into a heads-up display. “The highest resolution images, of course, are holograms, ” El-Ghoroury adds. “And because we can pack so many pixels, it’s enough to create these kinds of images.” 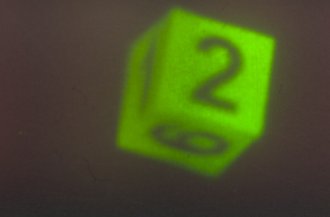 Ostendo recently demonstrated the technology to The Wall Street Journal. During the test, a prototype comprised of six chipsets laid together was combined to generate a 3-D hologram of green dice spinning suspended in the air. The paper described the object and its movement as “consistent, irrespective of the position of the viewer.” You can see a shot of the image below:

Getting the resolution of a holographic image to where it looks comparable to objects rendered on two-dimensional screens, however, would require a beam that generates three times as many pixels. To get there, El-Ghoroury’s team has been testing a method for making the pixels smaller, and with further refinement, expects to have a fully capable version of the chipset for the consumer market by 2016.

In the meantime, they’ve also tackled some of the concerns consumers often have with any new feature, mainly the likelihood of increased power consumption and costs. “It’s a fairly low-power chip and, yes, it will add to the cost of the device, ” he says. “But the benefits are that apps will be able to do more and users can do more. And since the whole ecosystem has more to gain more, there should be enough support all around to make it happen.”

At the very least, the company has financial the backing of deep-pocketed industry heavyweights such PayPal co-founder Peter Thiel, who’s contributed to the $90 million in total venture capital funding. They also received $38 million from government agencies. Investor Moran Bar-Kochva of New York-based venture firm Unison Capital envisions the Quantum Photonic Imager chipsets eventually having the sort of impact that more recent mainstream advancements like LCDs did at the turn of the century.

“It’s breakthroughs like this that later led to the thin modern laptops and flatscreen TVs we are used to today.” he says. “So it’s not hard to imagine a day when it’s incorporated into something like a pair of Prada glasses and used to generate things like a 3D map to show you where you need to go as you can walk down Fifth Avenue.”