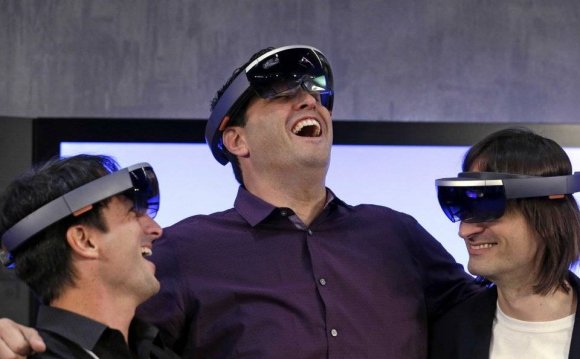 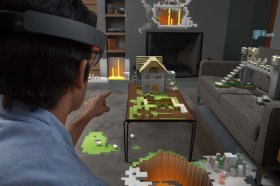 Microsoft today showed off an augmented reality headset slated for release later this year. The compact, visor-style device, called Hololens, generates holograms that make 3-D objects appear to the wearer to be overlaid on the real world.

Microsoft has developed a version of the game Minecraft for the Hololens headset. The device senses the environment around a person so that virtual objects can fit in alongside real ones.

Depth sensors in the device mean that virtual objects can be interactive and integrate smoothly into the real world. For example, a virtual game character could appear to be sitting on your coffee table, and respond to a prodding finger. Headphones built into the device can also give the impression that virtual objects are producing sound, even if they are behind you.

Microsoft unveiled Hololens at a press event Wednesday on its campus in Redmond, Washington. Demonstrations of the new device included an app that showed elements of the popular game Minecraft, which Microsoft acquired last year, sitting on top of real objects. Another app let the wearer build 3-D objects by manipulating a virtual toolbox and using voice commands.

“We’re not talking about putting you into virtual worlds, ” said Alex Kipman, a technical fellow at Microsoft who worked on Hololens, and previously led development of the Kinect depth-sensing game controller. “Holograms behave just like real-world objects.”

Kipman didn’t discuss the technology in depth, but suggested that Hololens uses a more sophisticated approach to tricking the human brain than is used by 3-D movies or virtual reality headsets such as the Oculus Rift. Those devices create the illusion of depth by showing different, flat images to each eye. Holograms provide a more authentic illusion by recreating the complex “light fields” that real objects produce.

The Microsoft Hololens device uses holograms to create the illusion of virtual 3-D objects integrating into the real world.

Light field displays have been tinkered with in research labs before, but no one has previously shown off a compact, wearable system, let alone what looks like a more or less finished product. A startup called Magic Leap last year received $542 million in funding from investors led by Google to work on headsets that use light fields for augmented reality (see “How Magic Leap’s Augmented Reality Works”). However, public descriptions of its technology suggest it is currently in the form of bulky tabletop devices.