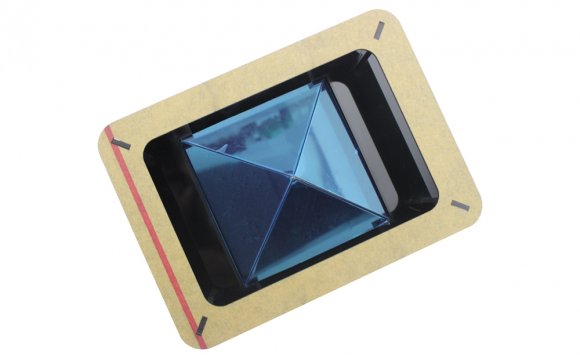 While hologram technology is occasionally associated with 3D printing technology as an interactive design tool – as is the case with Holus – one Italian designer is taking things even further by using 3D printed tools to create holograms. Called Gianluca Pugliese, he had developed a remarkably simple way to turn your smartphone into a holographic projector: simply 3D print a transparent pyramid and place it on top of a playing video in a dark room.

As the concept’s designer Gianluca tells 3ders.org, he is an avid fan of small 3D printed solutions and toys. ‘I am a 3D print developer in Italy, and over the last 4 years I made many things related to 3D printing. I am currently studying and testing new kinds of materials and in particular, I am working on light and 3d printing related projects, but for some reason I never share those creations online, ’ he says. However, this recent project is so remarkably clever and simple, he was happy to share it with us.

‘So, during the last few weeks I worked with a lot of materials and especially on how to make a 3d printed object really transparent, ’ he explains when asked how this project came about. The reason for this endeavor was seeing a simple Instructable project based around a simple plastic pyramid that can be used to create holographic effects in a dark room. Wanting to share this cool concept with a larger audience, he decided to make it 3D printable.

However, if you’ve ever tried to 3D print something transparent, you’ll know that it isn’t as easy as it sounds. After all, most filaments marketed as transparent aren’t really 100% transparent – something that you will need to properly experience the cool holographic effect. Finally, however, Gianluca got some interesting results using the Performance ABS by TreeD Filaments on his Wasp Delta 2040 3D printer. ‘After several tests, at different layer heights, I got the best result when using a layer height 0.3, the 0, 4 standard nozzle adding a little “trick”: I fixed a 0, 7 nozzle in the slicing software thus enabling the machine to extrude more material and create a rectangular section wire, ’ he explains.

The object itself is just a simple truncated pyramid, and could therefore probably be easily completed in PETG and PMMA filaments as well, but Gianluca was especially happy with the different options ABS provided. ‘I decided to go for the ABS because it allows me to try different solutions in the post production stage, ’ he says. ‘Like water based spray transparent paint, nitro spray transparent paint, acetone vapor and smooth-on XTC-3D.’

Perhaps expectedly, some of these methods didn’t produce the desired results – the nitro paint and the acetone vapors proved to be useless, with the water-based spray worked well but didn’t end up completely transparent. ‘The best outcome was indeed obtained thanks to the Smooth-on product, which helped me smooth the layers and make the pyramid more transparent and the object more resistant, ’ Gianluca tells us.

Check out the holographic effect here.

If you’d like to try this fun little tool for yourself, head over to Thingiverse here. Upon completion, it is also remarkably easy to use. You don’t need a special app or anything, just a smartphone powerful enough to play YouTube clips. Placing the pyramid on top is all you need to generate the fun holographic effect.