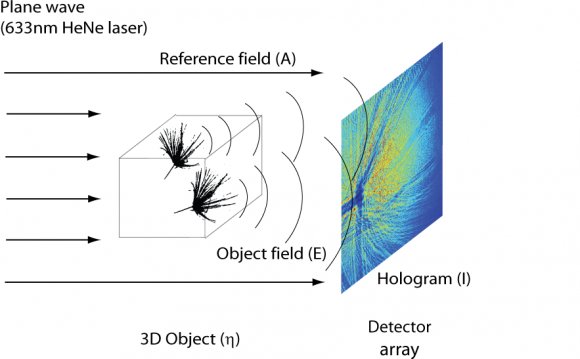 Dr. Dennis Gabor signs a copy of the Museum of Holography's
inaugural exhibition catalogue, "Through The Looking Glass, "
during his 1977 visit to the museum. (Photo by Paul D. Barefoot)
Dr. Dennis Gábor
(b. 1900, Budapest - d. 1979, London)
Nobel Prize in 1971 for his investigation and development of holography.
What is Holography?

Holography dates from 1947, when British/Hungarian scientist Dennis
Gabor developed the theory of holography while working to improve the
resolution of an electron microscope. Gabor, who characterized his work
as "an experiment in serendipity, " coined the term hologram from the
Greek words holos, meaning "whole, " and gramma, meaning "message."
Further development in the field was stymied during the next decade
because light sources available at the time were not truly "coherent"
(monochromatic or one-color, from a single point, and of a single
wavelength).

This problem was solved in 1960 with the invention of the Laser. A laser
produces nearly coherent light and was found to be ideal for making crisp,
clear holographic images. Over the past three decades a number of other
mediums, such as x-rays, have been used to create holographic images. A
beam of coherent x-rays can be used to view particles the size of only one
or two atoms.

A hologram is quite simply the recording of interference patterns created
by two incident waves. Essentially, an interferometer. The drawing at right
is of an interference pattern created by two waves propogating from two
separate points. The regions of interference set up a standing wave which
can be used to expose film or other media reactive to the type of waves
being used. The film would then contain a three dimensional interference
pattern. For more, Visit A History of Holography at Holophile.com

About Dr. Dennis Gábor
(adapted from his autobiography)

Dr. Dennis Gábor was born in Budapest, Hungary, on June 5, 1900, the oldest son of Bertalan Gabor, director of a mining company, and his wife Adrienne. His life-long love of physics started suddenly at the age of 15. Fascinated by Abbe's theory of the microscope and by Gabriel Lippmann's method of colour photography, he, with his late brother George built up a home laboratory and began experimenting with wireless X-rays and radioactivity. He entered the Technische Hochschule Berlin and acquired a Diploma in 1924 and his Doctorate of Engineering in 1927 in electrical engineering. While there he spent his free time working on physics at the University of Berlin. His doctorate work was the development of one of the first high speed cathode ray oscillographs and in the course of this, made the first iron-shrouded magnetic electron lens. In 1927 he joined Siemens & Halske AG and made one of his first successful inventions; the high pressure quartz mercury lamp with superheated vapour and the molybdenum tape seal, since used in millions of street lamps. In what Dennis calls his "first lesson in serendipity, " he invented the mercury lamp while attempting to develop a cadmium lamp which proved unsuccessful.

With the rise of Hitler In 1933, Dennis left Germany and after a short period in Hungary went to depression stricken England. Finding a jobs as a foreigner was very difficult. He eventually obtained employment with the British firm, Thomson-Houston Co., in Rugby, on an inventor's agreement. His work on gas discharge tubes gave him a foothold in the BTH Research Laboratory where he remained until the end of 1948. Dennis writes that the years after the war were the most fruitful. One his first papers was on communication theory. He also developed a system of stereoscopic cinematography, and in the last year at BTH carried out the basic experiments in holography, at that time called "wavefront reconstruction".

On January 1, 1949 he joined the Imperial College of Science & Technology in London, first as a Reader in Electronics, and later as Professor of Applied Electron Physics, until his retirement in 1967. With post-graduate assistants, he attacked many problems, almost always difficult ones, such as theelucidation of Langmuirs Paradox, the inexplicably intense apparent electron interaction, in low pressure mercury arcs. They also made a Wilson cloud chamber, in which the velocity of particles became measurable by impressing on them a high frequency, critical field, which produced time marks on the paths, at the points of maximum ionisation. Other developments were: a holographic microscope; a new electron-velocity spectroscope; an analogue computer which was a universal, non-linear "learning" predictor, recognizer and simulator of time series; a flat, thin colour television tube; and a new type of thermionic converter. Theoretical work included communication theory, plasma theory, magnetron theory, and a scheme of fusion.

After his retirement in 1967 he remained connected with the Imperial College as a Senior Research Fellow and became Staff Scientist of CBS Laboratories, Stamford, Conn. where he collaborated with the President, life-long friend, and father of the color television, Dr. Peter C. Goldmark, in many new schemes of communication and display. Though happy with his work, he begain to spend much time on a new interest: the future of industrial civilization. He became more and more convinced that a serious mismatch has developed between technology and social institutions, and that inventive minds ought to consider social inventions as their first priority. This conviction has found expression in three books, Inventing the Future, 1963, Innovations, 1970, and The Mature Society, 1972. He wrote, "Though I still have much unfinished technological work on my hands, I consider this as my first priority in my remaining years."

Dennis Gabor the inventor of holography