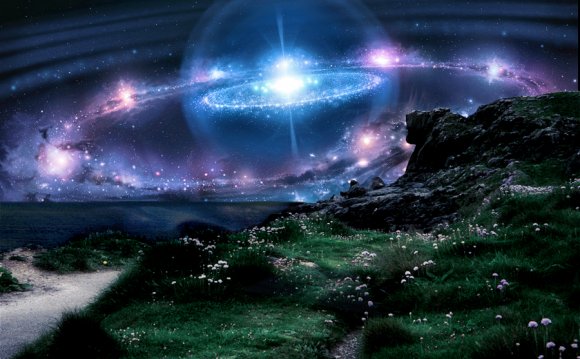 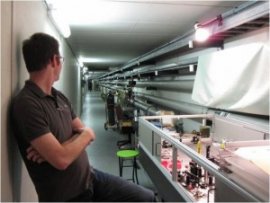 In 2008, Fermilab particle astrophysicist Craig Hogan made waves with a mind-boggling proposition: The 3D universe in which we appear to live is no more than a hologram.

Now he is building the most precise clock of all time to directly measure whether our reality is an illusion.

The idea that spacetime may not be entirely smooth – like a digital image that becomes increasingly pixelated as you zoom in – had been previously proposed by Stephen Hawking and others. Possible evidence for this model appeared last year in the unaccountable “noise” plaguing the GEO600 experiment in Germany, which searches for gravitational waves from black holes. To Hogan, the jitteriness suggested that the experiment had stumbled upon the lower limit of the spacetime pixels’ resolution.

Black hole physics, in which space and time become compressed, provides a basis for math showing that the third dimension may not exist at all. In this two-dimensional cartoon of a universe, what we perceive as a third dimension would actually be a projection of time intertwined with depth. If this is true, the illusion can only be maintained until equipment becomes sensitive enough to find its limits.

“You can’t perceive it because nothing ever travels faster than light, ” says Hogan. “This holographic view is how the universe would look if you sat on a photon.”

Not everyone agrees with this idea. Its foundation is formed with math rather than hard data, as is common in theoretical physics. And although a holographic universe would answer many questions about black hole physics and other paradoxes, it clashes with classical geometry, which demands a universe of smooth, continuous paths in space and time.

“So we want to build a machine which will be the most sensitive measurement ever made of spacetime itself, ” says Hogan. “That’s the holometer.”

The holometer is named after a 17th century surveyor's instrument.

The name “holometer” was first used for a surveying device created in the 17th century, an “instrument for the taking of all measures, both on the earth and in the heavens.” Hogan felt this fit with the mission of his “holographic interferometer, ” which is currently being developed at Fermilab’s largest laser lab. 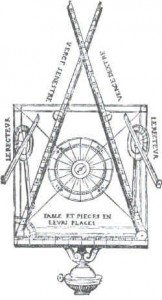 In a classical interferometer, first developed in the late 1800s, a laser beam in a vacuum hits a mirror called a beamsplitter, which breaks it in two. The two beams travel at different angles down the length of two vacuum pipe arms before hitting mirrors at the end and bouncing back to the beamsplitter.

Since light in a vacuum travels at a constant speed, the two beams should arrive back to the mirror at precisely the same time, with their waves in sync to reform a single beam. Any interfering vibration would change the frequency of the waves ever so slightly over the distance they traveled. When they returned to the beamsplitter, they would no longer be in sync.

In the holometer, this loss of sync looks like a shaking or vibrations that represent jitters in spacetime itself, like the fuzziness of radio coming over too little bandwidth.

The holometer’s precision means that it doesn’t have to be large; at 40 meters in length, it is only one hundredth of the size of current interferometers, which measure gravitational waves from black holes and supernovas. Yet because the spacetime frequencies it measures are so rapid, it will be more precise over very short time intervals by seven orders of magnitude than any atomic clock in existence.

"The shaking of spacetime occurs at a million times per second, a thousand times what your ear can hear, ” said Fermilab experimental physicist Aaron Chou, whose lab is developing prototypes for the holometer. “Matter doesn’t like to shake at that speed. You could listen to gravitational frequencies with headphones.”

The whole trick, Chou says, is to prove that the vibrations don’t come from the instrument. Using technology similar to that in noise-cancelling headphones, sensors outside the instrument detect vibrations and shake the mirror at the same frequency to cancel them. Any remaining shakiness at high frequency, the researchers propose, will be evidence of blurriness in spacetime.

Conceptual design of the Fermilab holometer

Hogan’s team liked the holometer idea so much they decided to build two. One on top of the other, the machines can confirm one another’s measurements.

This month, having successfully built a 1-meter prototype of the 40-meter arm, they will weld the parts of the first of the vacuum arms together.