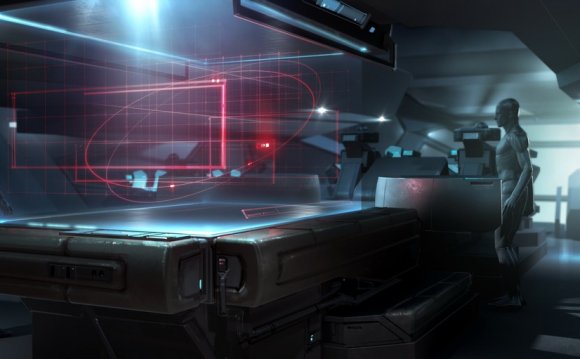 True three dimensional visualisation technologies have been fantasied and theorised about over the past half century. The scientific community and sci-fi fans know that the best way to make true 3D images is by using holographic technology.

Conventional stereo 3D is based on glasses or parallax barriers, lead to a poor 3D experience because it's really just an illusion created by twin-2D images aimed at either eye. This is fundamentally unacceptable to the human brain and leads to all sorts of problems including dizziness and nausea.

A true 3D display should have the scene or object in real space (floating in mid-air), allowing the viewer to look around objects and see them from a slightly different perspective, as they would in real life. This leads to a more comfortable and naturalistic viewing experience without all the problems of stereo 3D. Only holographic or similar approaches can deliver this kind of experience.

Although the research community has made significant advances in recent years, the prospect of a true holographic display remains elusive. The Engineering challenge is to build a true 3D display based on holographic technology that is practical and commercially feasible. This is because the diffraction of light requires features similar to the wavelength of light (less than a micron). This has proven to be an enourmous technical challenge for display design from a manufacturing, computation and bandwidth viewpoint.

Instead of trying to create a mythical "Star Wars" display, Holoxica took a more pragmatic approach by asking "what is the simplest holographic display we can make?". The answer: a single pixel, or voxel, in 3D space, that can be switched on or off. One voxel is not particularly interesting, so we move on to two voxels and worked up from there to 4 to 9 to 16 voxels and so on.

Holoxica's bottom-up approach is scalable and can be realised with currently available commodity technologies. 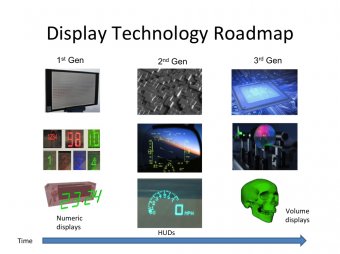 Holoxica has developed three generations of holographic displays. The displays become bigger, better and faster at each iteration. The roadmap is illustrated above. The various technologies are published, patented and have won awards.

Holoxica's first-generation holographic display demonstrator, built in 2010, had up to nine voxels and could show simple numeric information, icons, symbology etc. This technology can be used to build segmented 3D displays, similar to the early LCDs found in calculators and wristwatches. This approach is scalable and it's possible to realise all sorts of interesting products such as floating clocks or even 3D talking heads.

The second-generation display was announced in 2013. Thisn is a HUD-Style display with millions of voxels and freeform images floating in mid-air that can change in real time. Interactivity is added with a Kinect motion sensor that allows people to 'touch' icons in space and 'draw' in mid-air. The images are bright and visible under indoor lighting conditions, and the approach is scalable, leveraging existing manufacturing techniques and high-end components.

The third-generation display is currently moved beyond the research phase and into a proof concept. We're now seeking investment and partners to build this into a protoype followed by a beta product.

We are now commercialising this technology by putting it into our partners' products. If you want to learn more about licensing or how to embed these holographic video displays into your application then contact us.