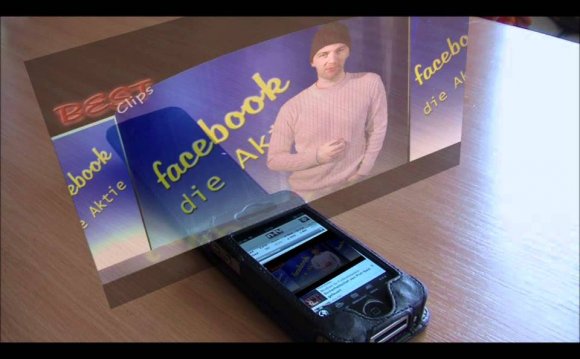 FACT CHECK: Can a genuine hologram projector be created using a smartphone and four pieces of plastic?

Claim: A genuine hologram projector can be created using a smartphone and four pieces of plastic.

WHAT'S TRUE: A video shows a smartphone producing an optical effect that makes a 2D image appear to be a 3D image.

Turn your Smartphone into a 3D Hologram

Origins: On 1 August 2015, a video purportedly demonstrating how to "turn your smartphone into a 3d Hologram" was uploaded to YouTube by user Mrwhosetheboss. Although the above-displayed video is real (in the sense that following its instructions will produce a similar optical effect), referring to what it depicts as "hologram projection" is something of a misconception.

The trick seen in this video is nothing new. Although smartphones have only been around for a few years, the optical illusion on display here is an old and familiar one that can be traced back to the 1800s, when John Henry Pepper unveiled "Pepper's Ghost" during a stage performance of Charles Dickens' play Haunted Man:

Pepper's most famous stage demonstration was the production of realistic ghosts through a series of optical projections. Announced by the Liverpool engineer Henry Dircks at a British Association for the Advancement of Science meeting in 1858 and developed by Pepper for practical use, the technique involved placing a huge sheet of plate glass on stage at a 45° angle, together with screens and special lighting.

"The imagery of Jackson — and previously Tupac during his "performance" at Coachella in 2012 — was actually created with an old magician's trick using a mirror, a 2D effect known as "Pepper's Ghost."

[While Michael Jackson] was a Pepper's Ghost effect, we are looking at ways to make [these experiences] more realistic and interactive, " said USC compsci research professor Paul Debevec. "I see it actually becoming three-dimensional and also interactive so that the performers are responding to the audience — almost puppeteered through motion capture while we start to build artificial intelligence into these performances. That’s pretty far off, but I think that's where it needs to head."

The image in the above-displayed video appears three-dimensional because it uses multiple 2D images displayed from different positions. As seen in the video below, the plastic pyramid is placed between four identical 2D images in order to create a 3D illusion:

In conclusion, if you have a smartphone, an old CD case, some tape, and an X-Acto knife, you can create a pretty cool optical effect. But that effect isn't quite the equivalent of turning your smartphone into a true "hologram" projector.