Our Universe Is A hologram 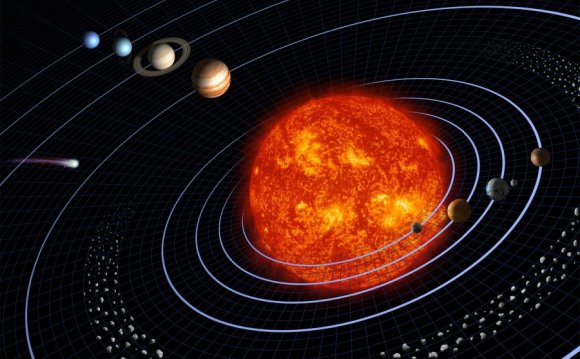 Photo credit: A Fermilab scientist works on the laser beams at the heart of the Holometer experiment. The Holometer will use twin laser interferometers to test whether the universe is a 2-D hologram / Fermilab

Even with all their local hangouts, impossibly affordable apartments, and a dragon or two (or three), television characters and their whole lives exist on a 2D screen. Are we just as clueless about our seemingly 3D world?

Physicists with the Holometer experiment at Fermi National Accelerator Laboratory want to know: Is our 3D space an illusion? The information about everything in our universe could actually be encoded in tiny packets that come in two dimensions - not unlike pixels up close on the TV screen - with the natural “pixel size” of space being much, much smaller than an atom.

“We want to find out whether space-time is a quantum system just like matter is, ” Fermilab’s Craig Hogan says in a news release. Matter continues to jiggle as quantum waves even when cooled to absolute zero; in the same way, digitized space should have built-in vibrations even in its lowest energy state.

By measuring the “quantum jitter of space” - which can be as small as a few billionths of a billionth of a meter - the holographic interferometer will test the limits of the universe’s ability to store information.

Underground and just outside Chicago, a twin pair of interferometers is placed close together. Each one sends an one-kilowatt laser beam in a tube at a beam splitter, and then down two perpendicular arms about 40 meters long. The light is reflected back to the beam splitter where the two beams recombine. The outputs of the two photodiodes are correlated to measure the holographic jitter of space-time that the two L-shaped machines share. Fluctuations in brightness will be created if there’s any motion.

Analyzing these fluctuations in the returning light allows researchers to see if the beam splitter moves a certain way - that is, if it’s being carried along on a jitter of space itself.

To avoid distractions by other sources of vibrations, the Holometer tests a frequency so high - millions of cycles per second - that motions of normal matter are unlikely to interfere. Additionally, the experiment is designed to identify and eliminate noise from conventional sources, like radiowaves emitted by nearby electronics.

“If we find a noise we can’t get rid of, we might be detecting something fundamental about nature - a noise that is intrinsic to space-time, ” Fermilab’s Aaron Chou explains. “A positive result will open a whole new avenue of questioning about how space works.” The team expects to gather data over this coming year.

New Study Confirms: Our Universe is a Hologram

Is Our Universe a Hologram? - Instant Egghead #63

Kostas Skenderis, Our Universe as a Hologram