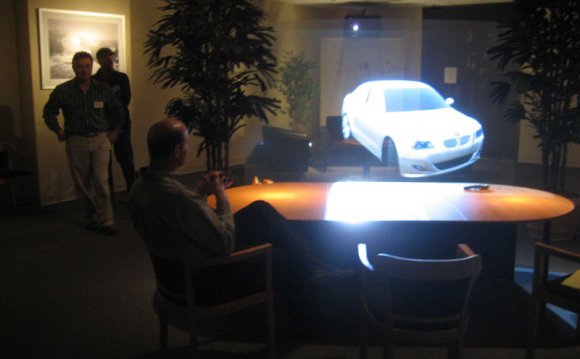 “Help me Obi-Wan Kenobi, you’re my only hope.”

Save for lightsabers, traveling at the speed of light and jittery robot sidekicks, perhaps the most memorable technology in the original Star Wars movie was the three-dimensional hologram of Princess Leia. Scientists have been trying to turn this fiction into a reality for years, with varying degrees of success. But new research into laser projection might finally lead to holograms we can touch.

The research team, comprising scientists from universities across Japan, has managed to create a display out of femtosecond lasers, which they’re calling “Fairy Lights.” These lasers pulse at one quadrillionth of a second and turn air in a specific point into plasma—or ionized air—which you can touch. Research lead Yoichi Ochiai told Popular Science that the plasma feels like sandpaper.

The team’s research shows that all sorts of science-fiction displays may be possible in the future. We could have holograms that wrap around real-world objects, or body parts, or computers interfaces that float in midair. The lasers pulse so quickly that disrupting the displays with our fingers could be fed back into a computer in what would appear to our eyes as real time, like moving a mouse and seeing a cursor move on a screen. Tony Stark would certainly be pleased.

There have been previous attempts to turn lasers into holograms, and while there has been some successes, this femtosecond laser has one key advantage: it wouldn’t sear your skin if you touch it. The Fairy Lights team pulses its laser at a faster rate—meaning less laser radiation exposure for your skin—that creates a perfectly safe hologram. The problem now is that the holograms that the team has has managed to create are tiny—not much larger than the size of a pinhead.