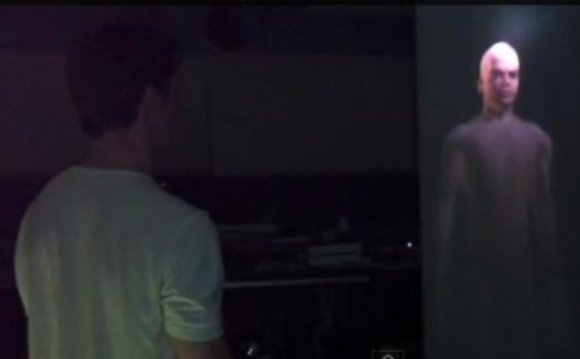 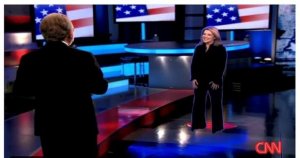 CNN's Wolf Blitzer speaks with correspondent Jessica Yellin, who was beamed into the New York studio from Chicago. CNN.com

Update 11:00 a.m. PST: Several readers have pointed out that CNN's technology was not true holography, and the story has been updated to reflect this.

Holy holograms, was that Princess Leia on CNN during election night?

No, it was just Jessica Yellin, a CNN correspondent. CNN beamed her image from Chicago to the CNN press center in New York City, where Wolf Blitzer and the rest of the team were covering election returns.

Yellin, who claimed she was the first person to be beamed in a "hologram" on live TV, explained for the audience how this was done. (See video below.) She said she was standing in a tent outside of the Obama headquarters in Chicago where the CNN crew had set up 35 high-definition cameras in a ring. She stood in the center of this ring and the cameras picked up her every movement and transmitted the image in 3D to the studio in New York.

While CNN is touting its special effects from election night as a '"hologram, " that may not be technically the case. CNN's "hologram" seems to have been done using overlay images and a green screen to virtually put the reporter in the same studio as Wolf Blitzer. But true holography uses a different technique to create a true 3D image of a person standing in the studio. According to Wikipedia, "holography is a technique that allows the light scattered from an object to be recorded and later reconstructed so that it appears as if the object is in the same position relative to the recording medium as it was when recorded. The image changes as the position and orientation of the viewing system changes in exactly the same way as if the object was still present, thus making the recorded image or hologram appear three-dimensional."

True holography technology has been demonstrated by many other companies. Telstra, the Australian phone company, to beam its chief technology officer from Melbourne to a business meeting about 460 miles away in Adelaide. Cisco Systems has also used holograms in demonstrations to talk about its telepresence products. Cisco's telepresence solution does not transmit hologram images, but it does use high-definition cameras and TV screens to make executives in different locations feel like they are having an in-person meeting.

For the most part, holography is still too expensive for most companies to deploy commercially.

Whatever technique CNN used, there's no doubt that it looked it cool. And it conjured up some futuristic thoughts of Star Trek and Star Wars. But as a viewer watching the broadcast in my living room, I thought the whole thing was a bit silly and sort of annoying.

At one point during his interview with Yellin, Blitzer commented that he felt bringing Yellin into the studio via hologram created a more intimate setting for their interview. He said he liked the fact that there weren't oodles of noisy people standing behind her.

But I disagree with Blitzer. It seems to me the whole point of sending correspondents to events is so that viewers at home can get a taste of what's happening in those places. I actually wanted to see the throngs of people in Chicago, standing behind Yellin, shouting and cheering for Obama.

It's that excitement and feeling like I am there with the reporter that makes me want to watch TV news instead of just reading a story in a newspaper or online.

I realize that CNN wanted to show off its fancy new technology. And I applaud the cable network for pushing the envelope in its use of technology. But I don't really mind the old-fashioned cutaways to correspondents in remote locations. CNN and other news stations have plenty of reporters and pundits sitting in its studios every night of the week. There isn't anything terribly interesting about that to me. For an event like this, when Blitzer is talking to someone who is actually at Obama's headquarters, I want to see what she is seeing.