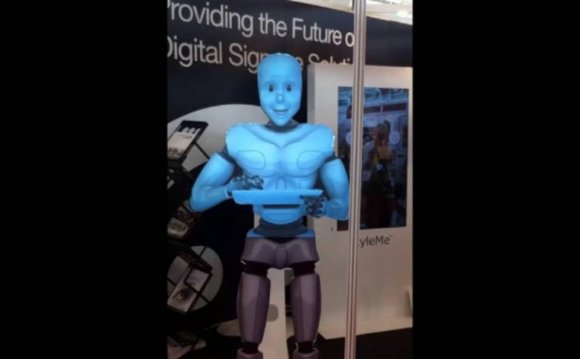 Aside from a few salesman toting tablets, buying a new car is the same monotonous physical process our parents and grandparents have done for decades. A few used car startups like Carvana have tried novelty with giant vending machines, and we all know what a few too many beers does on eBay Motors. But not much has changed with new car dealers. You’ve got to come in, wait, and sip day-old coffee.

But Volvo has an idea: Holograms! Put a virtual reality headset on the customer! Tell him to wave his arms around and play with imaginary cars the dealer has no intention of ordering!

Microsoft has just unveiled the HoloLens, an augmented reality device that projects real-time 3-D images anywhere, anytime. And in apologies to Google Glass, it’s way cooler and even dorkier. For now, this is a $3000 headband available only to developers, or double that of Glass (which, as of January, is no longer in production). Unlike Glass, which prompted bans over creepsters secretly recording locker rooms and casino games, HoloLens is a work tool. It also doesn’t require a paired smartphone to work. NASA’s Jet Propulsion Laboratory is using prototypes to simulate spacewalks on Mars, architects are bringing paper drawings to life, and med students in Cleveland are slicing open digital human bodies.

Volvo imagines a scenario where customers could configure their dream car without visiting a website. You’d walk into the showroom, expose the chassis if you’re so inclined, and rotate, flip, and walk around a high-res, fully digitized car. Then, you’d be invited to experience Volvo’s automated safety features, like auto-braking and collision alerts, without actually trying them out. On the production line, Volvo assembly workers could read every spec on a door panel without checking the piece of paper taped to it. Most naturally, Volvo designers would use a HoloLens to bring their concepts to immediate life.

We have no idea how HoloLens actually performs, since every video Microsoft has released looks like average Hollywood-style CGI. VR headsets have been around a long time, too, even though they’ve been horrendous (see Nintendo Virtual Boy). Other automakers, like Mini’s see-thru goggles and Hyundai’s augmented head-up display, are attempting to bring virtual reality straight to the dashboard.