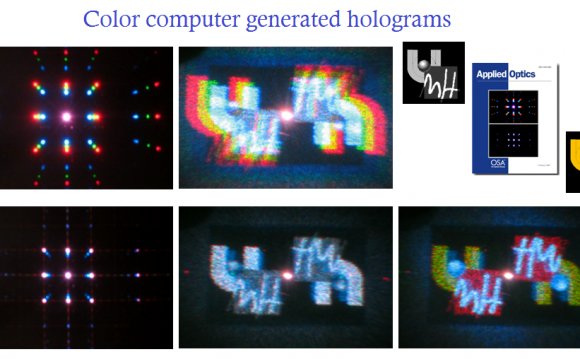 Optical computers Will use holograms as "circuit elements". Parallel processing is made possible because when a hologram is addressed, all the information comes out simultaneously

Bubble chamber holography has been performed at the Enrico Fermi National Laboratory. Three-dimensional tracks in a 15-foot deep bubble chamber were recorded. The creation and annihilation of matter and antimatter can be seen through these holograms.

Biomedical applications of holography is actively pursued in the U.S. and Europe. Holograms are made inside live organs through optical fibers, providing more details than any previous alternate techniques.

Instantaneous growth rate of a live plant can be directly observed through a hologram. Using optical fibers, the rigid body movements can be isolated from the net growth information.

Holographic optical elements (HOE) are used to perform the same functions as lenses, mirrors, gratings, etc. It can also combine several functions together not possible with conventional optical elements. Some examples:

Holographic interferometry is used in numerous laboratories for non-destructive testing. It visually reveals structural faults without damaging the specimen.

Anti-counterfeiting in credit card is now a common practice. In some European countries, credit cards for telephone calls use erasable holograms. The 5000 Shilling (about $700) note of Austria is printed with a golden hologram of Mozart on it.

Head-up display (HUD) are holographic windshields installed in military aircraft (soon, in automobiles). It allows the pilot (driver) to keep his/her eyes at a distance target while information is relayed through the windshield.

Holographic microfiche for high density information storage is more attractive then conventional microfiche. It can be duplicated more economically and, like laser discs, is impervious to scratches and dirt. It also contains 50 times more information than microfiche.

Light-in-flight measurements can be made using picosecond lasers, recording stop-action 3-D pictures of waterfronts of light. This can be used to study ultra-high speed phenomena as well as "seeing" through translucent specimen.

Femto-second lasers (gives off light pulses in one-billionth of one-millionth of one second! There are more femtoseconds in one second then there are seconds in 30 million years!) can be used to make holograms through translucent media, such as human flesh. The aim is to see your inside using light, not X-ray

Holographic scanners are used in store check-out counters for reading the bar codes. A rotating computer-generated hologram is responsible for both the scanning and the detecting of the scattered light.

Phase conjugation is the most exciting branch of electro-optical science. Holograms are recorded instantaneously on crystals and a "pump beam" projects the real image precisely back onto the object. The "time-reversed" object beam can be 10, 000 times more intense than the original. This has wide range applications from star war to optical circuit components.

HOLOSTORE is a holographic computer memory system being manufactured to replace your disc drive. It will have thousands time more memory capacity and no mechanical movements.

So, holograms are not just 3-D images!

The study of holography requires the understanding of practically all the basic principles of classical and modern optics, as well as communication theory. It directly involves the fundamental ideas of Nobel Laureates Lippmann, Bragg, Zernicke, Michelson, Gabor, and others.