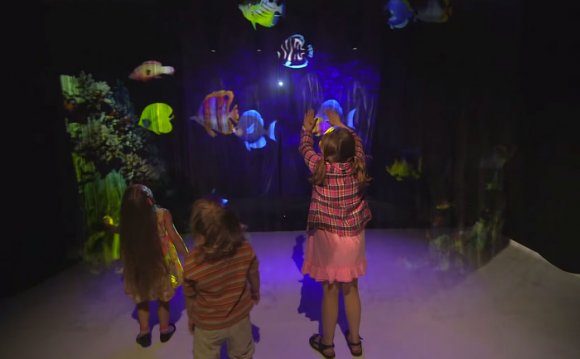 "Help me Obi Wan Kenobi, you're my only hope!" Now, after 30 years of geek-longing for honest-to-goodness holograms, US researchers have unveiled holographic technology to send and receive actual full-motion 3D images. Scientists at the University of Arizona (it's always colleges that come up with this stuff) say their prototype “holographic three-dimensional telepresence” (stupid name) is "the world's first practical 3D transmission system that works without requiring viewers to wear special glasses or other devices."

The new research was just published in the journal Nature. Of course, nobody is thinking about home telephony applications. After all, it's been over 70 years since the invention of the videophone and we just now got FaceTime from Apple computer, which is hardly ubiquitous. Instead, the first likely applications of the new technology will probably be in the areas of telemedicine and teleconferencing to mass entertainment. We think it should be built into TVs so that you can hologram your friends into your living room - I mean, come on, we've been waiting for over 30 years!

"Holographic telepresence means we can record a three-dimensional image in one location and show it in another location, in real-time, anywhere in the world."

Right now, 3D technology in the form of holograms is limited to static 3D images that can't move, or 3D images projected onto 2D surfaces that usually require the use of glasses. Anything that has involved motion and 3D has been extremely low resolution and entirely impractical. The new technology allows for motion and the impression of a physical presence for the images being projected. It's based on a new “photographic” polymer developed by the California division of Japanese electronic materials company Nitto Denko.