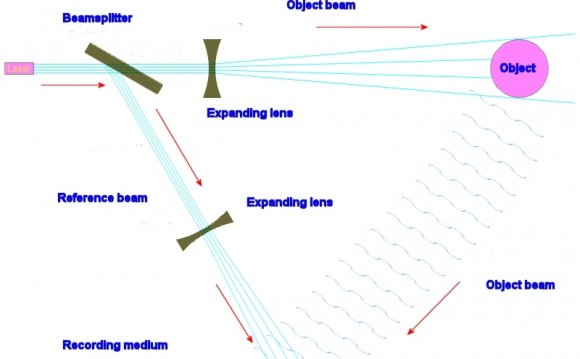 If you want to understand gravity, it makes sense to study black holes. Nowhere else can you find so much gravity so conveniently compacted into such a relatively small space.

In the 1990s, other physicists (notably Gerard ’t Hooft and Leonard Susskind) developed this insight further, proposing the “holographic principle”: Information contained in a three-dimensional volume can be completely described by the two-dimensional boundary surrounding it. Just as an ordinary holographic image represents a 3-D scene on a 2-D flat surface, nature itself can store information about the interior of a region of space on the surface enclosing it.

If you think about it, it’s not entirely crazy. There are familiar ways that the information in a 3-D space can be contained on its boundaries. Just imagine a room full of 3-D objects with mirrors on the walls. You can reconstruct everything in the 3-D room from the images on the 2-D mirrors.

In 1995, physicist Juan Maldacena developed the holographic idea further. In essence, he showed that quantum math describing physics in three spatial dimensions without gravity can be equivalent to math describing a four-dimensional space with gravity. (Such an equivalence of two different mathematical descriptions is called a duality.)

Maldacena’s insight suggested that holography might be the key to merging gravity with quantum mechanics. Physicists have sought a way to incorporate gravity into a quantum field theory for decades. If Maldacena is right, then apparently all you need is an extra dimension of space (which is provided naturally in superstring theory). Given an added dimension, spacetime with gravity emerges from the physics described by quantum field theory on its boundary.

Lately this idea has resurfaced in a new context. Some physicists have proposed that gravity has something to with quantum entanglement — the spooky connection between distant particles that befuddled Einstein. And it seems that the holographic duality identified by Maldacena has something to do with the gravity-entanglement connection.

“The emergence of spacetime in the gravity picture is intimately related to the quantum entanglement … in the corresponding conventional quantum system, ” Mark Van Raamsdonk of the University of British Columbia argued in a 2010 paper. “It is fascinating that the intrinsically quantum phenomenon of entanglement appears to be crucial for the emergence of classical spacetime geometry.”

More recent work relates the gravity-entanglement link to mathematical tools called tensors. Describing entanglement in complicated systems of many particles is made easier by using networks of tensors to quantify how multiple particles are entangled. Using tensor networks, physicists have developed algorithms that enable simpler analysis of quantum matter such as superconductors. That work has been going on for years. Newer work with tensor networks has provided insights into how the holographic principle relates entanglement to gravity.

In particular, a formulation of tensor networks called MERA (for multi-scale entanglement renormalization ansatz) seems especially promising with respect to understanding gravity. MERA tensor networks describe patterns of entanglement in certain complicated quantum systems, generating a geometry reminiscent of the extra-dimensional space that Maldacena discussed in his duality. In other words, it’s a real-life realization of the quantum field theory-gravity duality.

“When seen from this perspective, ” writes Orús, “one would say that geometry (and gravity) seems to emerge from local patterns of entanglement in quantum many-body states.” Thus, he points out, the tensor network approach supports the conclusion suggested in previous work by Raamsdonk and others: “Gravitational spacetime emerges from quantum entanglement.”

This link between tensor networks, entanglement and gravity may prove useful in studying the physics of black holes or in investigating the quantum nature of spacetime at very small distances, Orús proposes.

Mathematical details of how tensor networks connect entanglement to the geometry of spacetime are beyond the scope of basic blogging. If you want the whole story of Hilbert space, entanglement renormalization and unitary and isometric tensors, start with Harvard physicist Brian Swingle’s 2012 paper in Physical Review D. (A preprint is available, and a paper with further developments is available here.) Orús has posteda more recent (and more accessible) survey of the field.