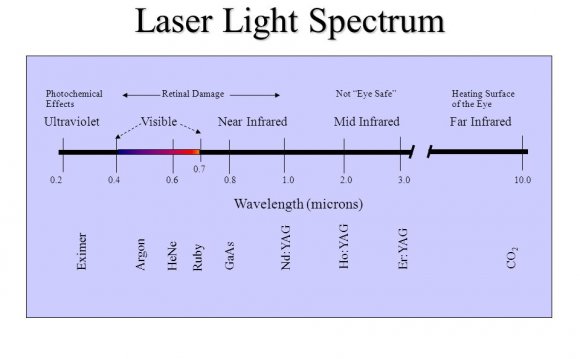 Laser Radiation and the Electromagnetic Spectrum

The Fundamentals of Laser Operation

The word ‘laser’ is an acronym for Light Amplification by the Stimulated Emission of Radiation. A laser was first demonstrated in 1960 by Theodore H Maiman working at the Hughes Corporation, although the term ‘laser’ was first coined by Gordon Gould of Columbia University.

To understand how laser action occurs, one must first consider the atomic nature of matter. An atom consists of a central nucleus surrounded by a cloud of electrons. Quantum theory explains that the electrons in atoms exist in discrete energy states and at thermal equilibrium they are maintained in the so-called ‘ground state’. The energy state of an atom can be altered by the emission or absorption of a photon of electromagnetic radiation (light). The electron cloud in atoms which have absorbed light is referred to as existing in an ‘excited’ or ‘higher level’ energy state.

Einstein was the first scientist to propose that an excited atom can return to its ground state in either of two processes, which he referred to as ‘spontaneous’ and ‘stimulated’ emission. The conditions for stimulated emission, and hence laser operation, require that the excited atom is prompted into emission of a photon by the application of light of the same frequency (wavelength) as that which the electron decay itself will produce. Unlike spontaneous emission, the photon emitted as a result of this electromagnetic stimulation carries the same phase, frequency, polarisation and direction as that of the stimulating radiation. If one were to consider the case where all of the atoms have been excited into a higher energy state (known as a population inversion), the stimulating radiation would trigger an avalanche of stimulated photons that are all emitted in phase and in the same direction.

The stimulating radiation in a laser is provided as a result of feedback within a resonant optical cavity. In practice, a laser cavity is normally comprised of a 100% reflecting rear mirror and a partially reflecting front mirror (the partial reflectance is necessary to let some light out of the laser whilst still providing the feedback required for laser action). When illuminated (or "pumped") by a radiation source such as a flashlamp or diode laser, the broadband emission that results from the spontaneous photon emission travels back and forth and experiences the highest gain (amplification) at a frequency determined by the configuration of the resonator and the optical characteristics of the laser medium. That gain leads to all of the photon emissions occurring on the same, chosen, transition in the same direction, and all with the same phase relationship. This amplification of the stimulated emission of coherent, near-monochromatic, unidirectional photons is what defines laser action. 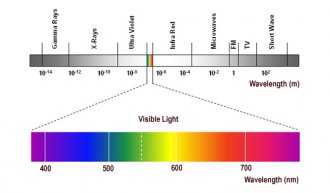 It is often said that almost any material can be made to lase. Lasers differ not only with respect to the wavelength of the light they produce but also the optical power and the manner in which the power is emitted. Lasers which emit a continuous beam of light are termed "cw" (after continous wave operation), while other lasers produce an output in the form of pulses of light. For the purpose of classifying their hazards within the laser safety standards, pulsed lasers are placed into different groups depending upon the length of their optical pulses. The table below lists the four groups.

In the case of pulsed operation with a low pulse repetition frequency (the number of pulses emitted per second), the critcal parameter from a laser safety point of view is the peak power of each pulse. If the repetition rate inceases, the average power becomes the more dominant parameter. Please note that certain lasers can be operated in more than one mode.

Lasers are categorised into four, general hazard classes based upon accessible emission limits or AELs. These limits indicate the class of the laser and are listed in EN 60825-1 and the American National Standard ANSI Z136.1 for the safe use of lasers. The AEL values for the laser classes are derived from the medical MPE (Maximum Permissible Exposure) values. The MPE values specify the danger level for the eye or the skin with respect to the laser radiation. Since November 2001, the laser classes are summarised per the table below.